The 16th Annual Tribeca Film Festival, set for April 19-30, is taking over lower Manhattan for another year of quality filmmaking, groundbreaking new digital storytelling, and some of Hollywood’s biggest names. With a power roster that includes over 200 films playing from 28 countries, 78 of which are world premieres, six international, six North American, two U.S., and six New York premieres, you might need some help figuring out what to watch.  MoviefiedNYC is here with our Top Five Latinx picks that include: a documentary on what ever happened to Elián González (an Alex Gibney joint); a narrative film about the journey of a boxer from the Dominican Republic (this is the first time the D.R . has a selection at the festival); a movie about an Argentinian actor trying to make it in NYC; and finally an online feature about  one of oldest civil wars that’s still going strong.

Check them out below and make sure to click on the link for showtimes.

Thanksgiving, 1999: Two fishermen on the Florida Straits find a young Cuban boy, Elián González, floating alone in an inner tube. Their discovery evolves into a custody battle between Elián’s Cuban father and his Miami-located relatives that brings the conflict between Cuba and the U.S. to the forefront. Eighteen years later, ELIÁN, executive produced by Alex Gibney, gives the now grown-up Elián the chance to tell his own side of the story. In English, Spanish with subtitles.

Cisco has his back against the ropes. After spending 15 years in an American jail, he’s returned to the Dominican Republic yet is unable to get a job, a problem compounded by his mother’s ailing health and his younger brother’s delinquent habits. To make money, he’s resorted to illegal street fighting. But Cisco finds a possible salvation in Nichi, an Italian ex-boxer who sees dollar signs in Cisco’s gritty fighting skills. With Algenis Pérez Soto, Ettore D’Alessandro, Laura Gómez, Ricardo A. Toribio. In Spanish with
subtitles.

After giving up a successful soap opera career in his native Argentina for a chance to make it in New York, Nico finds himself staying afloat with odd jobs bartending and babysitting. In a moving depiction of the vibrant city, Nobody’s Watching questions who is watching and how we adjust ourselves accordingly. With Guillermo Pfening, Rafael Ferro, Paola Baldion, Elena Roger, Cristina Morrison, Kerri Sohn, Marco Antonio Caponi. In English, Spanish with subtitles.

The Western hemisphere’s oldest civil war is still going strong in the jungles of Colombia. The National Liberation Army (ELN) —a Marxist military organization— has been fighting for revolution since 1964, and with the FARC having declared a ceasefire, the ELN is today the last active guerrilla army in the Americas. In Spanish, English with subtitles. 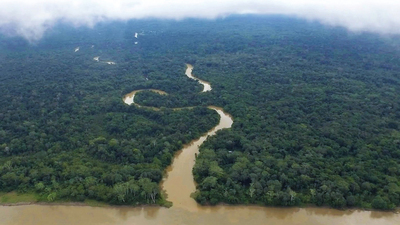 Deep in the Amazon, a renowned marine biologist and a reality TV star are each working to save the indigenous pink river dolphin from being hunted to extinction. When a scandal erupts, ethical questions are raised as murky as the waters of the Amazon River. Mark Grieco’s (Marmato) surprising documentary digs into the ethics of activism in the modern media age. In English, Portuguese, Spanish with subtitles. Earth Day Screening.