Tomorrow morning, at the ungodly hour of 5:18 am PST, Issa Rae and John Cho will announce the nominations for the 92nd Academy Awards.  I have no idea why they announce them at 5:18.  Why not 5:15? One day when I am on a long train ride through New Jersey, I will possibly remember that this is troubling me and look it up, draining the last 15% battery on my iPhone.  But I digress…

It has been an interesting year for some of the potential nominees.  Films that had every right to slip unnoticed into the background were suddenly receiving accolades and various award nominations (Parasite) and other films that started off with incredible hype have quietly (or maybe not so quietly)  faded into the background (I am totally looking at you Cats).

And now, with only hours to go before the official announcement, prognosticators, like myself, put our analysis and historical knowledge to the test to predict the nominees.  We do this for the good of the people.  Oh, who am I kidding?  I do this so that I can brag to my husband that I predicted something correctly.  I feel like it give me street cred in my living room.

Let’s dive in, shall we? Several years ago, the Academy voted to change the rules surrounding the number of nominees.  Now it states that there can be anywhere from five to ten nominees. I am picking ten simply because it is the most that can possibly be nominated in this category.  Several of these films have been lauded as the best picture of the year since they came out in theaters months ago.  Once Upon a Time in Hollywood, 1917, Marriage Story, and The Irishman have all consistently been nominated for most of the pre-Oscar awards.  They are all shoo-ins for a nomination.  Joker and Parasite are probably pretty safe bets, as well.  Little Women has been praised by some as one of the best adaptations of Louisa May Alcott’s coming of age story.  However, as a friend pointed out to me the other day, it is like a very well done PBS movie.  That may reduce its chances of picking up a nomination.  Jojo Rabbit and Knives Out were both fantastic films, but Oscar has never been a huge fan of comedy.  With one film being a satirical look at the Hitler Youth and the other being a black-comedy/whodunit, they have the potential for being overlooked.  However, that is the reason for the potential ten nominees: so that films that might otherwise be dismissed for being “light” can get the recognition they deserve.  My final pick is Bombshell.  This is probably a longshot, however, I thought it was one of the better films this year, mostly due to the strong performances by its three lead actresses.  Ford v Ferrari may sneak into this spot instead of Bombshell if the Academy goes for ten nominees. 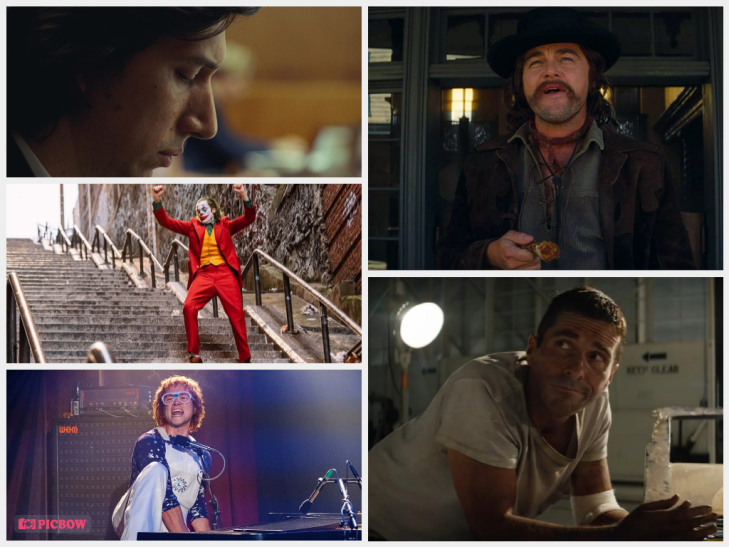 Joaquin Phoenix is tapped to win this category by virtue of losing 40 pounds for the role.  His name will definitely be among those announced tomorrow.  Driver, DiCaprio, and Egerton have all received Golden Globe, Screen Actors Guild (SAG), and BAFTA nominations, so they are pretty safe bets, as well.  That leaves one space left.  Ford v Ferrari came out in September and has been largely forgotten about since then, however, Christian Bale did manage to get Globe and SAG nominations.  Since the Screen Actors Guild is the largest voting body of the Academy, I am going to guess that Bale will round out this category.  However, do not be surprised if Jonathan Pryce  or Antonio Banderas are surprise nominees for their roles in The Two Popes and Pain and Glory, respectively, over Bale.

Zellweger, Theron, and Johansson are pretty much guaranteed to have their names announced in the Lead Actress category.  These three have been consistently recognized for their performances in these films.  That leaves two spots open.  If you asked me a week ago, I would have said that Cynthia Erivo was definitely going to be nominated for her portrayal of Harriet Tubman in Harriet.  However, the BAFTA nominations came out and BAFTAled me (see what I did there?). Besides the three previously mentioned actresses, BAFTA nominated Saoirse Ronan for Little Women and Jessie Buckley for Wild Rose.  While Erivo’s omission from the BAFTA list initially confused me, I now believe that Erivo will pick up a nomination.  That last spot is tricky.  It could go to Saoirse Ronan for Little Women or Awkwafina for her role in The Farewell.  I am giving the edge to Awkwafina because Oscar loves it when a comedic actor successfully turns out a dramatic role. Tom Hanks, A Beautiful Day in the Neghborhood
Al Pacino, The Irishman
Joe Pesci, The Irishman
Brad Pitt, Once Upon a Time in Hollywood
Anthony Hopkins, The Two Popes

Hanks, Pacino, Pesci, and Pitt have all been on every pre-Oscars award list for this category.  I am pretty confident that each will add another Oscar nomination to their CV.  This last spot is a lot more tricky.  There isn’t one person that is slightly edging out the others in this category.  Anthony Hopkins received Golden Globe and BAFTA nominations for this role in The Two Popes, while Jaime Foxx picked up a SAG nomination for Just Mercy.  Just to make things interesting, I am also hearing rumblings from other publications that Song Kang Ho may pick up an acting nomination for Parasite.  I am giving the edge to Hopkins, however, I would love it if Foxx or Ho are nominated.

If I thought the Supporting Actor category was hard, this one has made my life a nightmare.  I can safely say that Robbie and Dern will be on this list.  For several months, Jennifer Lopez has continued to receive acclaim for her role in Hustlers.  I thought she was a lock too, until those damned BAFTA nominations came out.  Suddenly, Lopez usurped by Florence Pugh in Little Women, Scarlett Johannson in Jojo Rabbit, and a second nomination for Robbie in Once Upon a Time in Hollywood!  This also reminded me that the Oscars have not always been kind to actors who are HUGE stars and tabloid mainstays (see Jim Carey and Jennifer Aniston).  I do think Lopez will be able to pull through and get her first nomination.  Johannson will also probably be nominated in this category as well as in the Lead Actress category.  If this happens, she will be only the 12thactor to receive two nominations in the same year.  This final spot is more up in the air.  Kidman is an Oscar darling playing a real person.  While she did not receive a Globe or BAFTA nomination, she did receive a SAG nomination.  Since many of the SAG members are academy members, this might give her an edge.  Other possible nominees in this spot are Kathy Bates for Richard Jewell, Annette Bening for The Report, Florence Pugh for Little Women, and Zhao Shuzhen for The Farewell.  Also, don’t discount Meryl Streep.  OSCAR LOVES MERYL STREEP!