Jurassic Park, along with most of Steven Spielberg’s catalog at the time, was a staple of my childhood. It taught me what an adventure movie should be like in every measurable way. Some would blame Spielberg for ushering in the modern era of substance-devoid summer blockbusters, but that criticism seems unfair to me. He set the standard for character-driven action flicks, and despite what other filmmakers have done with the formula over the years, his legacy has held strong in both quality and quantity.

Spielberg’s movies, and Jurassic Park in particular, are adept at keeping not only the audience’s conscious gaze, but the tension-rich atmosphere from start to finish. An ominous note by the film’s composer, John Williams, sets the mood perfectly, as a ground crew works to safely introduce a velociraptor to its new enclosure. We’re also introduced to Dr. Alan Grant (Sam Neill) and Dr. Ellie Sattler (Laura Dern), two archaeologists who are asked by their dig’s main source of funding, John Hammond, to visit his new dinosaur park. Of course, they’re not told what is at the park. In this case, seeing is believing.

Once at the park, they meet up with Dr. Ian Malcolm (Jeff Goldblum) and Donald “The Blood-sucking Lawyer” Gennaro (Martin Ferrero), and are asked to evaluate if it is safe for the general public. The sheer spectacle of living, breathing dinosaurs is short-lived, as the park soon loses power and its guests are left to fend for themselves. 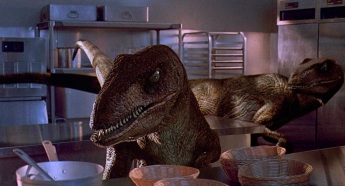 Fear and survival instincts replace awe and wonderment, and the goal of everyone is to reunite and get off the island as soon as possible.

When you think of the Jurassic Park series, your brain might conjure up CG images of rampaging dinos, but in fact, a lot of the effects in the original movie are practical. Most of the velociraptors’ major scenes, for example, are just dudes in suits. There’s also a five-ton, fully anamatronic version of the T-Rex and a full-size triceratops puppet. Point being, you don’t see stuff like this anymore, and it’s incredible.

Aside from what Stan Winston’s team accomplished with the dinosaur puppets, there’s a constant theme of nature vs. technology, and it’s one that doesn’t get enough follow-through in the rest of the series (at least in my opinion). Once Jurassic World comes around, it’s pretty clear nobody cares about the dangers of playing God. I find that to be a flaw in the franchise, but you won’t find the same error in Jurassic Park. Ian Malcolm is a reminder that life will always “find a way,” and while I would think the scientists at the park would have realized the potential harm from dumping a bunch of foreign DNA into a jar and swishing it around, the “fool me once” idiom is in effect.

Getting back to the atmosphere and tension, a lot of it is owed to the pacing of the film. There’s never a lull in suspense, which creates the kind of nervous nail-biting I’ve come to expect during a Spielberg story. Add to that several memorable characters, and the reasons for success become obvious. Imagine not having Jeff Goldblum’s brand of discomforting flirting with Dr. Sattler or Wayne Knight’s smarmy selfishness (perfected over the years with his Newman character on Seinfeld). Lots of the story beats wouldn’t work with lesser actors, and having quality in this department is something I also expect from Spielberg.

There are dinosaur movies, and then there is Jurassic Park. While not the first to feature the extinct giants on the big screen (neither is Caveman, but check it out anyway, it remains the definitive experience on the subject.