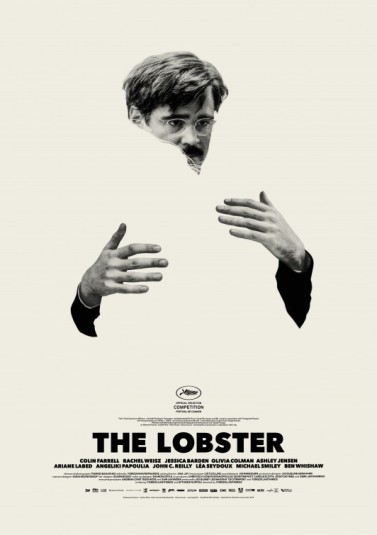 The Lobster, which was awarded the Grand Jury Prize at last year’s Cannes Film Festival, is the kind of bizarre film I crave. Set in the near future, it takes an absurdist angle to explore what it means to be single (“Single? What’s wrong with you?”). In this gray futuristic story, the uncoupled are arrested and transferred to The Hotel, where they must find a mate and fall in love within 45 days or they will be forever transformed into an animal (or crustacean) of their choosing. How could I not love this? Written and directed by Yorgos Lanthimos, who brought us the Oscar nominated Dogtooth (2011). This is his first English language film, and he’s just as compelling, disturbing and thought provoking in English as he is in Greek. This time he has a few big screen names from Hollywood’s John C. Reilly, to across the Atlantic with England’s Rachel Weisz, France’s Léa Seydoux and middle-aged, pudgy Irish Colin Farrell in a very strong yet understated performance. All doing great ensemble work in a movie whose title begs the question, “what the hell is this about?”

The Lobster is essentially a love story that explores the human condition and examines the ubiquitous fear of there’s something wrong with you if you’re single. Beyond the film’s strange, bleak view of a world where people are failures unless they’re in love (and become a voiceless animal), it’s a laugh-out-loud comedy—sad, violent, smart and oddly hilarious. Its story is completely approachable and engaging, yet it leaves the viewer with much to ponder: does being coupled matter that much but most importantly, what animal would you choose to be?

The Lobster challenges today’s ever-present, on-line dating age with its constant hum of “you should be married and or partnered, or, at least, looking for a partner—what online dating platforms do you use? Lanthimos takes a very darkly comic approach with The Lobster as he comments on an ultimately meaningless (IMO) struggle—that often transforms into fear as one gets older—of being plagued with singleness while the Married are safely coupled and snuggled into the perceived norms of society. How we uncoupled long to be inoculated against the disease of singleness! Coupled and cured and never to hear the words, “when are you going to find someone and settle down.” Everyone’s clock is ticking, we are all aware of it. Such universal concerns of loneliness, failure to find a partner, and worries about dying are poetically explored by Lanthimos. The future world that The Lobster exists in is one that is believable—minus the turning into animals thing. The world that the Lobster’s characters inhibit is the near future, a world that feels like one we today could possibly live to see in our own not-so-distant future. With that The Lobster should age well as it’s not dated by current cinematic ideas of what the future may like.

Will The Lobster find a wide audience in the U.S.? Most likely not. This is no Captain America. It’s a deliciously odd picture that’s too subtle to be a crowd pleaser. Also, it’s in limited release in New York City and Los Angeles. In Lanthimos words, “[In my movies] we raise questions about many things, I don’t want to . . . give specific narrow answers to those questions.“ If you are looking for answers this may not be the viewing experience you’re looking for, but if you want to walk away with some food for thought—and, of course a good laugh—then The Lobster is the right selection for you. In case you’re wondering what animal I would choose. I have to say, an elephant—they’re just so majestic.