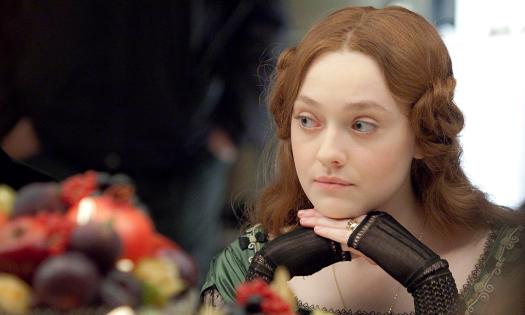 Any fan of period pieces is going to fawn over the beautifully shot Effie Gray, which aesthetically makes all the right moves. Ruth Myers’ costuming, and some fabulous art decoration by Paul Ghirardani and Juliana Overmeer, stands out as delightful to the eye. Everything is perfectly suggestive of a Hollywood vision of the Victorian Era, down to Dakota Fanning’s pre-Raphaelite face (the subject of most of the cinematography). But for a film hoping to dive into the sexual inhibitions and repressions of the time period, it’s duller than anything. It is never clear why John Ruskin (Greg Wise) finds his new bride, Effie Gray (Fanning), so repulsive upon the night of their wedding, or why he continues to torment her psychologically for the remainder of the film. I found myself not really caring to find out the truth behind his coldness, nor being moved once Effie supposedly finds her happiness in the arms of the young painter Everett Mallais.

Though Emma Thompson is effortlessly fantastic as Lady Eastlake, a strong figure of feminine solidarity, Thompson’s screenwriting isn’t quite up to par this round. The plot is predictable yet confusing all at once, and the dialogue adds little or nothing to the film. As I already stated, Dakota Fanning’s face is the subject of more than its fair share of close-up shots, and the young actress is always a joy to watch onscreen. Julie Walters and David Suchet are both abundantly frightening as John Ruskin’s overbearing parents who aid their son in attempting to zap the joy du vivre out of his young wife. The rest of the notable cast of English actors turns out nothing less than compelling performances.

The film’s supposed exploration of sexuality at a time when the subject was greatly taboo is superficial at best, with the most obvious sexual connection in the film being an incestuous one between John and his mother (she insists on bathing her middle-aged son and refuses to allow Effie to take part). This could help to explain the elder Mrs. Ruskin’s desire to keep young Effie under the influence of a mysterious medication—most likely a sedative of some sort—for much of the time, making her greatly ill in the process. With her spirit destroyed and her physical being weakened, it takes the outside gaze of another to realize what is becoming of Effie Gray. The pre-Raphaealite painter Everett Millais (Tom Sturridge), commissioned by Ruskin’s father to make a portrait of his son, falls in love with Effie while simultaneously realizing his disgust with his former mentor for his treatment of his young wife.

*SPOILER ALERT* If you’re at all curious how divorce worked in England during the Victorian Era, the final act of Effie Gray proves an interesting look. She is examined by a doctor and when “all the signs of natural virginity” are found to be intact, is informed that she may seek an annulment on the grounds of her husband’s inability to perform the sex act. And so she escapes him, and though she cannot quite run into Millais’ arms just as soon as she’d like (the characteristic Victorian patience and virtue are still part of Effie’s make-up) it is clear that she will be allotted her happiness in due time.

Though Effie Gray falls short in some of its promises of titillating plot devices and interesting character development, it is a lovely piece of filmmaking, visually. Anyone who has a passion for the aesthetics of a well-made period piece will enjoy her story, but for those who crave a bit more color in their storytelling, may want to leave Effie alone.