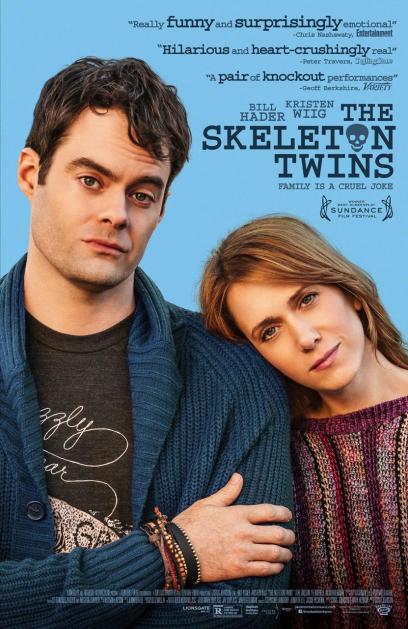 “Kristen Wiig and Bill Hader costarring in a movie? Count me in.” These were my exact thoughts when I came across The Skeleton Twins. Kristen Wiig and Bill Hader are both known for not only being humorous but also for being charismatic, goofy, and jiving off of each other’s quirkiness when brought together. This is why I was so excited to delve into The Skeleton Twins, which unravels into quite the story. Co-written by Craig Johnson and Mark Heyman and directed by Craig Johnson, The Skeleton Twins follows Milo (Hader) and Maggie (Kristen Wiig), estranged twins that reunite after ten years and an unsuccessful suicide attempt. Remorseful for how much they’ve drifted apart, Maggie invites Milo to live with her and her over-excitable husband, Lance (Luke Wilson). It’s apparent that the twins have lost touch over time, but shared feelings of anger and memories of a better time bring them closer together again, and force them to deal with their individual inner turmoil.

As the The Skeleton Twins sibilings, Hader and Wiig are astounding, this is much to no one’s surprise. They mesh so well together, conveying the tension and pieces of togetherness that Milo and Maggie share after having drifted for so long. They share a common ambition, which like most of ours, is ultimately to find comfort in the hand that life is dealing them. Unsurprisingly, difficulties abound as Milo is forced to open old wounds in dealing with newer ones, and Maggie finds herself carelessly seeking validation and excitement looking for a way out of a her “Martha Stewart Wonderland.” Although Wilson doesn’t play a big part in the film, his take on happy-go-lucky Lance is not only enjoyable but adds depth to the overall story of how cliché Maggie’s life had become. Lance was the cherry on top of Maggie’s quintessential life, one that she was not happy to be apart of. As the film progresses, Milo and Maggie find that rekindling their once spirited and loving relationship is the key to balancing out the hardships that life keeps throwing at them.

The Skeleton Twins is much darker than you’d expect for a film starring two of Saturday Night Live’s funniest stars. Although the undertone is dark, there are bits and pieces of comedic relief that are just exquisitely crafted, and I enjoyed the balance of delving deeper into these characters’ raw emotions while still executing the actors’ area of expertise, comedy. The Skeleton Twins is a fantastic independent film showcasing that an independent film can hold its own in the ever-growing world of cinema.