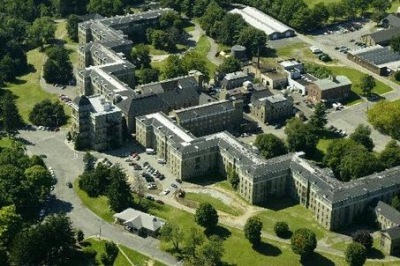 Antiquity Echos is the name of the group, the purpose of their film is simple: using a combination of historic imagery, interviews, and stop motion filming they paint a portrait of the historic and cultural importance of the historic Greystone Park Psychiatric Hospital. Their aim is to share, not only the historical significance of the Greystone property, but also to share the importance of saving the building as a piece of national history for future generations to see first-hand.

https://youtube.googleapis.com/v/TuZ6PvIuPhU&source=uds
Constructed there well over one-hundred years ago, Greystone sits on a hilltop in Parsippany, NJ.  At the time of its completion, it was the largest singular building in the U.S., and held that title until the Pentagon was completed in 1943. The enormous psychiatric hospital featured large wings stretching outward from a center point, offering each patient access to fresh air, sunlight. Though often seen as eerie places, these old asylums were actually built with the best of intentions for the patients. Since 2008 the grand old hospital has remained abandoned.
More videos by Antiquity Echoes
https://youtube.googleapis.com/v/fwoejq7EH2E&source=uds
As the story of Greystone Psychiatric Hospital unfolds, Greystone’s Last Stand will continue to document the final hours of structure’s story, hoping that this is only a pause in between chapters of its history.
For more information, please visit – ‪http://www.PreserveGreystone.org.