Search
The Film Society of Lincoln Center and The Museum of Modern Art present the 43rd annual New Directors/New Films March 19 – 30. For forty-three years New Directors/New Films has been an annual rite of early spring in New York City, bringing exciting discoveries from around the world to adventurous moviegoers. The series is dedicated to the discovery of new works by emerging and dynamic filmmaking talent; this year’s festival will screen twenty-seven international feature films and thirteen short films.

Tickets can be purchased online at newdirectors.org, or in person at the box offices of the Film Society of Lincoln Center (W. 65th Street, between Broadway and Amsterdam Avenue) and The Museum of Modern Art (11 W. 53rd Street). Tickets are $15, $12 for members of the Film Society of Lincoln Center and Museum of Modern Art. Tickets for Opening Night, Centerpiece, and Closing Night screenings are $20, $15 for members.

This super-stylish and spellbinding Persian take on the vampire genre doubles as a compact metaphor for the current state of Iran. Ana Lily Amirpour’s debut feature guides us on a dreamlike walk on the wild side, into the nocturnal and sparsely populated underworld of “Bad City,” an Iran of the mind that nevertheless rings true.

A girl walks into a bar…and starts telling jokes about her vagina and her boyfriend. But it turns out the joke’s on her: the boyfriend’s been sleeping with her friend, and he takes advantage of her public, extremely off-color verbal antics to dump her.

The Babadook
Jennifer Kent, Australia, 2014
Young widow Amelia lives with her seven-year-old son, Samuel, who seems to get odder by the day. His father’s death in an accident when driving Amelia to the hospital to give birth to him may have something to do with the boy’s unnerving behavior, which scares other children and perhaps even his own mother.
Satuday, March 22, 9:30pm – FSLC
Sunday, March 23, 9:00pm – MoMA

Winner of the Locarno Film Festival’s 2012 Best Emerging Director award for his debut feature Ape, Joel Potrykus makes a brazen leap forward with his sophomore effort, Buzzard, a darkly comical look at a slacker office temp who gets by on cold SpaghettiOs while getting off on stealing refund checks from his employer.

Screening with:
Person to Person
Dustin Guy Defa, USA, 2014, HDCam, 18 min.
A man is baffled when he finds a beautiful woman sleeping on his floor the morning after a party—and becomes even more so when she refuses to leave.
Sunday, March 23, 6:15pm – FSLC
Monday, March 24, 8:30pm – MoMA

Welcome to Winchester University where, in the name of diversity, the all-black residence hall Parker/Armstrong is about to be dismantled. In the middle of an Ivy League campus, all racial hell breaks loose: Samantha White (Tessa Thompson) uses her campus radio show to call out the administration as well as her fellow students, while Afroed geek Lionel (Tyler James Williams) writes for the all-white college newspaper hoping to expose hypocrisy campus-wide.

Richard Ayoade has built a loyal following with his hilariously “off” characters, notably the one he plays in the TV series The IT Crowd and those that inhabit his 2010 directorial debut, Submarine. His cerebral, visually arresting follow-up, The Double, based on Dostoevsky’s 1846 novella, enters slightly darker territory, and recalls the stylizations of Terry Gilliam. Starring Jesse Eisenberg as both Simon James, a humdrum worker drone, and his gregarious doppelgänger, James Simon, the film is set within both the claustrophobic confines of Simon’s bureaucratic workplace and his paranoid mind. Aided by a stellar supporting cast (including Wallace Shawn, Mia Wasikowska, Sally Hawkins, Paddy Considine, and Chris O’Dowd), The Double firmly establishes Ayoade as a leading voice in contemporary cinematic comedy. A Magnolia Pictures release. 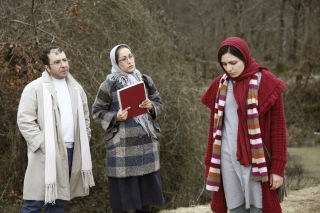 A bold experiment in perpetual motion with an enigmatic time-warp narrative, Fish & Cat plays out as one continuous shot, with the camera moving among a host of characters at a remote forest and a nearby lake.

How strong does a fence need to be, or how loud must an alarm blare, or how brightly should an open field be lit for us to feel safe? The impossibility of a definitive answer to these kinds of questions lies at the heart of Benjamín Naishtat’s unsettling feature debut. Set in an economically destabilized Argentina, the film weaves stories of characters from multiple social strata into an interlocking narrative of paranoia and fear.
Spanish with English subtitles
Friday, March 21, 9:00pm – MoMA
Sunday, March 23, 9:15pm – FSLC
The Japanese Dog
Tudor Cristian Jurgiu, Romania, 2013

Offering a striking departure from the gallows humor of the Romanian New Wave, Jurgiu’s Chekhovian The Japanese Doginstead pays loving homage to the tender and gently comical family dramas of Yasujiro Ozu, Late Spring and There Was a Father in particular. Victor Rebengiuc, a legendary veteran of stage and screen, imbues the elderly Costache Moldu with a stoic, yet fragile dignity as he reunites with his estranged son after losing his wife and home in a devastating flood.

Gilles Deroo & Marianne Pistone, France, 2013
Mouton (“Sheep”) is the nickname of Aurelien (David Mérabet), who at 17 is granted independence from his troubled family and goes off to live on his own in a seaside town. Hired as a chef’s assistant, Sheep fits in well with his coworkers and makes new friends. Life is finally good.
French with English subtitles
Thursday, March 20, 9:00pm – MoMA
Saturday, March 22, 6:30pm – FSLC
Of Horses and Men
Benedikt Erlingsson, Iceland/Germany, 2013

A country romance about the human streak in the horse and the horse in the  human. Love and death become intertwined with enormous consequences. The fortunes of people in the countryside as seen through the eyes of horses. The debut feature by celebrated stage director Benedikt Erlingsson announces the arrival of an innovative new cinematic voice.

Romania, mid-1980s. Sorin (Sorin Leoveanu), a gifted mathematician whose career advancement is blocked because he is not a member of the Communist party, comes to the attention of the security services after he secretly arranges for an academic paper on his new theorem to be published in an American journal.

As immersive a documentary of active war as has ever been made, this unsparing account of the struggle for Homs follows—from August 2011 to August 2013—two close friends whose lives are completely altered when their beloved city is bombed into a ghost town.
Arabic with English subtitles
Tuesday, March 25, 6:15pm – MoMA
Wednesday, March 26, 9:00pm – FSLC
Salvation Army (L’Armée du salut) – US PREMIERE 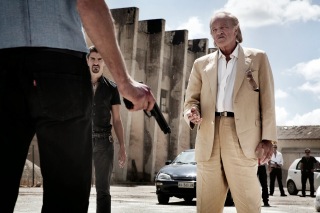 In their supremely assured debut feature, writer-directors Fabio Grassadonia and Antonio Piazza breathe new life into the time-honored genre of the Mafia thriller. While hunting down a rival who has ordered a hit on him, the titular gangster (a smoldering Saleh Bakri) invades a Palermo home, only to discover his prey’s blind sister, Rita (Sara Serraiocco), in the basement.
Saturday, March 29, 9:00pm – MoMA
Sunday, March 30, 4:00pm – FSLC
She’s Lost Control
Anja Marquardt, 2014, USA
In a world of increasing layers between people, intimacy is perhaps the most elusive ingredient of human interaction. A person can either take the plunge and emotionally connect with their OS (à la Spike Jonze’s Her) or, in the case of She’s Lost Control, psychotherapists can refer patients to sex surrogates.
Saturday, March 29, 9:00pm – FSLC
Sunday, March 30, 4:30pm – MoMA
A Spell to Ward Off the Darkness
Ben Rivers & Ben Russell, Estonia/France, 2013, DCP

As collaborators, Ben Rivers and Ben Russell, two intrepid and nomadic talents of experimental film and art, have created one of the most bewitching cinematic experiences to come along in a great while. In A Spell to Ward Off the Darkness, Robert A.A. Lowe, the celebrated musician behind Lichens and Om, gives a strangely affecting, perhaps even trance-inducing performance as the film’s Parsifal figure, a quixotic man who embarks on a quest for utopia—the holy grail of infinite truth, self-knowledge, and spiritual connectedness. 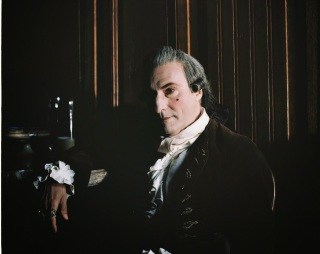 No one else working in movies today makes anything remotely like the Catalan maverick Albert Serra, a cerebral oddball and improbable master of cinematic antiquity. Known for his unconventional adaptations of Cervantes’s Don Quixote (Honor of the Knights) and the Biblical parable of the Three Kings (Birdsong), Serra here stages the 18th-century passage from rationalism to romanticism as a tussle between two figures of legend, Casanova and Dracula. 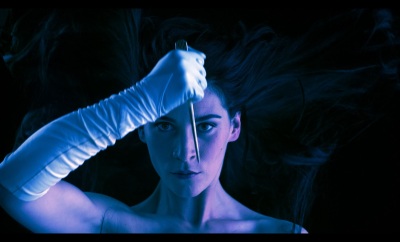 Deepening and amplifying their super-fetishistic remix of Italian giallo and horror tropes in Amer (ND/NF 2010), Hélène Cattet and Bruno Forzani here create a delirious and increasingly baroque pastiche of the trance film and cinéma fantastique—and then push it to breaking point.

In the hands of masters like Jacques Tati, Lucrecia Martel, and Chantal Akerman, cinema that at first appears to merely observe and record is in fact masking intricately constructed commentaries, built from seemingly mundane experiences. In the case of The Strange Little Cat, an extended family-dinner gathering becomes an exquisitely layered confection ready for writer-director Ramon Zürcher’s razor-sharp slicing. 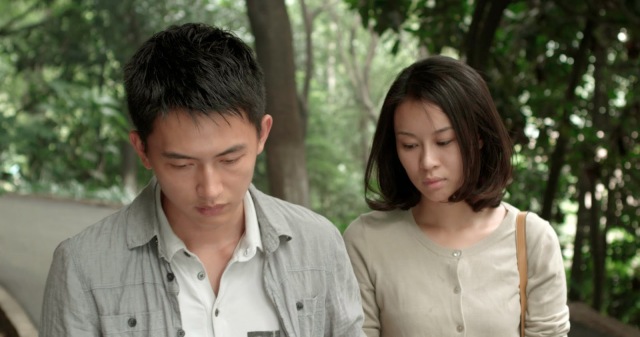 Notions of surveillance and observation are turned inside out in Trap Street, producer Vivian Qu’s first turn as a director. While surveying city streets for a digital-mapping company, engineer Qiuming catches sight of Lifen, a beautiful young woman. Immediately smitten, he follows her to a street that doesn’t appear on any map or even a GPS.