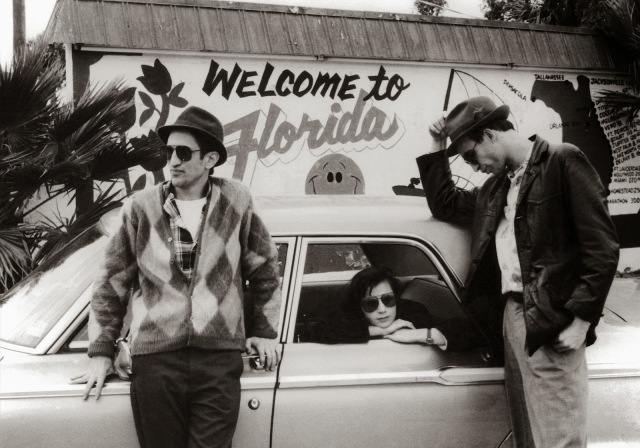 Complete retrospective will include all 11 features, plus short films and music videos, as well as appearances by Jarmusch – all leading up to the release of his latest film, NYFF Favorite Only Lovers Left Alive, at the Film Society on April 11

Jarmusch’s latest genre reinvention, Only Lovers Left Alive, a paean to the pleasures of long-term relationships in the guise of a vampire movie, was a selection of the 2013 New York Film Festival, the fifth of the longtime New York City resident’s films to screen at the NYFF. The others, all screening in the retrospective, are Stranger Than Paradise (1984), the indie classic that established his signature style; his Louisiana-set comedy, Down by Law (1986), starring John Lurie, Tom Waits, and Roberto Benigni; Mystery Train (1989), his portrait of misfits and foreigners adrift in the land of Elvis; and Night On Earth (1991), his exploration of cross-cultural communication by way of five taxicab vignettes set in L.A., New York, Paris, Rome, and Helsinki. 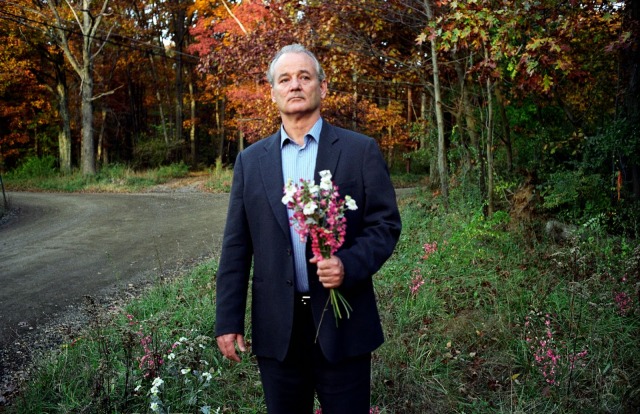 Jarmusch’s first full-length collaboration with Bill Murray (after the latter’s memorable turn in COFFEE AND CIGARETTES) was this tender, melancholic road movie.

Screening with
INT. TRAILER. NIGHT. (2002)
An actress (Chloë Sevigny) attempts to take a cigarette break in her trailer on a film set.
Sunday, April 6 at 6:00PM
Wednesday, April 9 at 1:15PM
COFFEE AND CIGARETTES (2003)
Jarmusch’s films all depend to some extent on the appeal of watching ineffably cool people doing very little, but none more than this patchwork quilt of coffee-fueled conversations, hangout sessions, and chance encounters. Iggy Pop and Tom Waits make hilariously stilted small talk in a roadside diner.
Screening with
THE GARAGE TAPES (1992)
Three short films featuring Tom Waits.
Thursday, April 10 at 1:15PM
Thursday, April 10 at 9:00PM
DEAD MAN (1995) 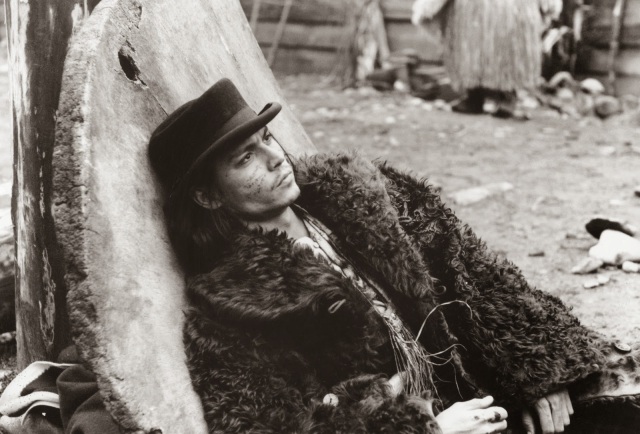 Jarmusch’s career took a decisive turn with what has come to be recognized as his masterpiece: a hypnotic, parable-like revisionist Western about the spiritual rebirth of a dying 19th-century accountant (Johnny Depp) named William Blake (no relation—or is there?). 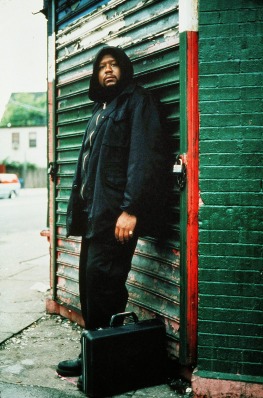 “Even if one’s head were to be suddenly cut off, he should be able to do one more action with certainty.” Jarmusch’s first narrative feature after DEAD MAN was another revisionist genre film: a mashup of the mob movie and samurai film with one foot placed in ’60s hit man chic (Melville’s LE SAMOURAI and Suzuki’s BRANDED TO KILL are two key reference points) and the other in ’90s hip-hop culture (the soundtrack is by RZA, of Wu-Tang fame).

Screening with
Big Audio Dynamite – Sightsee M.C. (1987)
Friday, April 4 at 1:30PM
Friday, April 4 at 9:15PM
Thursday, April 10 at 6:30PM
THE LIMITS OF CONTROL (2009)
In DEAD MAN, Jarmusch rebuilt the Western from the inside out; 14 years later, he did the same for the espionage thriller. THE LIMITS OF CONTROL, gorgeously shot by Wong Kar-wai’s DP of choice Christopher Doyle, is a spy film gutted of action, a mystery that takes place almost entirely in the time between plot points, a James Bond movie whose Bond hails from the Ivory Coast rather than Scotland.
Screening with
The Raconteurs – Steady as She Goes (2006) 4 min
Sunday, April 6 at 8:30PM
Wednesday, April 9 at 3:45PM
MYSTERY TRAIN (1989) 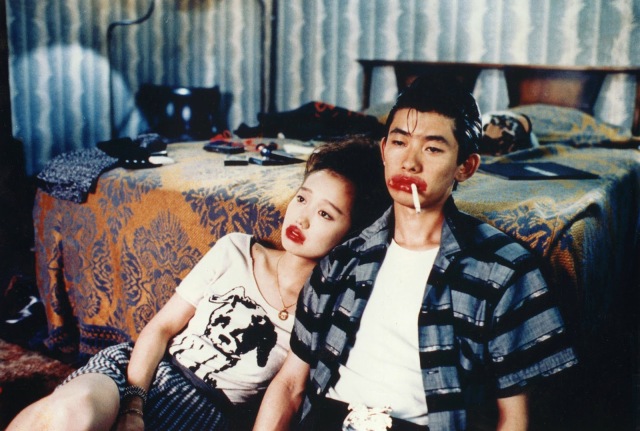 MYSTERY TRAIN, like DOWN BY LAW, is a small group portrait of misfits and foreigners adrift in the American South. Here the setting has shifted to Memphis, the cast has widened, and the mood has slightly darkened. A young, rock ’n’ roll–obsessed Japanese couple (Masatoshi Nagase and Yûki Kudô) make a trans-Pacific pilgrimage to the home of (for her) Elvis and (for him) Carl Perkins.

Screening with
JOE STRUMMER — WHEN PIGS FLY (1993) 30 min
A documentary of Joe Strummer recording the score to Sara Driver’s film WHEN PIGS FLY.
Thursday, April 3 at 3:30PM
Saturday, April 5 at 6:00PM
NIGHT ON EARTH (1991)
Each of Jarmusch’s films leading up to NIGHT ON EARTH had dealt to some degree with urban disconnect and the possibility of cross-cultural communication—a tendency that climaxed with this set of five taxicab vignettes set in L.A., New York, Paris, Rome, and Helsinki. Tonally, NIGHT ON EARTH veers from broad comedy—Roberto Benigni telling increasingly outré yarns from his sexual history—to more sober territory.
Screening with
Tom Waits – I Don’t Wanna Grow Up (1992) 3 min
Wednesday, April 2 at 4:00PM
Friday, April 4 at 6:30PM
ONLY LOVERS LEFT ALIVE (2013) 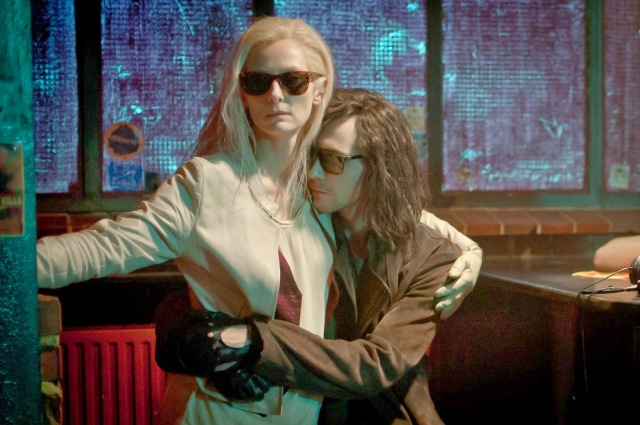 Tom Hiddleston and Tilda Swinton make a dashing and very literal first couple—centuries-old lovers Adam and Eve—in Jim Jarmusch’s wry, tender take on the vampire genre. When we first meet the pair, he’s making rock music in Detroit while she’s hanging out with an equally ageless Christopher Marlowe (John Hurt) in Tangiers. (Long-distance spells aren’t such a big deal when you’ve been together throughout hundreds of years.) Between sips of untainted hospital-donated blood, they struggle with depression and an ever-changing world, reflect on their favorite humans (Buster Keaton, Albert Einstein, Jack White), and watch time go by, each finding stability in the other. ONLY LOVERS LEFT ALIVE is Jarmusch at his most personal and emotionally direct: a fond, wistful portrait of (extremely) long-term coupledom and a tribute, alternately funny and melancholic, to the works of art and the acts of love that might make life worth living forever.

Showtimes TBD. Check filmlinc.com for details.
PERMANENT VACATION (1980)
Jarmusch’s debut feature: 75 minutes of frayed downtown cool. Aloysius Parker (Chris Parker) is the prototype for many of Jarmusch’s subsequent loner heroes: he loafs aimlessly around his scuzzy apartment and crumbling New York streets reading French poetry, flirting with cute girls at Nicholas Ray screenings, stealing cars, and obsessing over his half-punk, half-dandy image. For all its youthful self-seriousness (or maybe in part because of it), PERMANENT VACATION is a touching vision of what it was like to be head over heels with art, love, and oneself in late-1970s New York.
Screening with
Talking Heads – The Lady Don’t Mind (1986) 4 min
Wednesday, April 2 at 9:00PM
Sunday, April 6 at 4:00PM
STRANGER THAN PARADISE (1984)
Jarmusch established himself as a major new talent with this low-budget, black-and-white portrait of three directionless young people: a detached, world-weary New York hipster (John Lurie), his fedora’d best friend (Richard Edson), and his 16-year-old Hungarian cousin (Eszter Balint), who’s just landed in the States with an arsenal of Screamin’ Jay Hawkins tapes. With its careful mix of irony and pathos, STRANGER THAN PARADISE is one of the watershed American indie films of the 1980s.
Screening with
Talking Heads – The Lady Don’t Mind (1986) 4 min
Wednesday, April 2 at 7:00PM
Thursday, April 3 at 1:30PM
YEAR OF THE HORSE (1997) 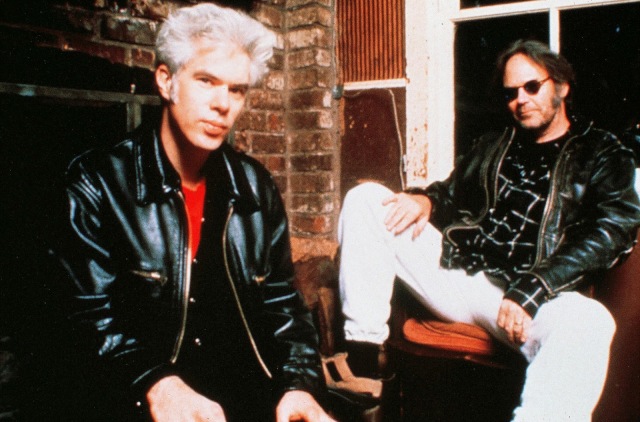 A year after Neil Young provided the searing, largely improvised solo guitar soundtrack for DEAD MAN, Jarmusch made his only documentary to date: a scrapbook of interviews, archival clips, and concert footage of Young’s band Crazy Horse shot over the course of their 1996 world tour..