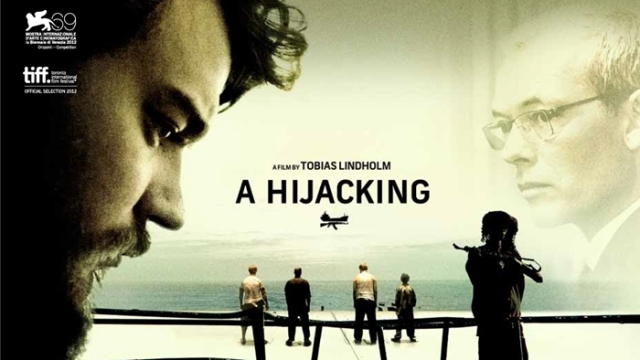 A Hijacking is a riveting and realistic Danish thriller from writer-director Tobias Lindholm. Based on a true story, Lindholm takes us on a harrowing journey when a Danish freighter is taken captive by a band of Somali pirates on the Indian Ocean.  Now this storyline seems ripe for Hollywood blockbuster material—explosions, bigger than life heroes, and a score to punctuate everything with an exclamation point. But no. Lindholm goes in the completely opposite direction of that, giving us a slow-burning and intimate portrait of the hijacking victims’ psychological breakdown.
The story travels between the events that take place on the ship, primarily seen through the eyes of the freighter’s cook Mikkel (Pilou Asbæk)  and between those events that take place in the offices of the shipping company in Denmark, as seen through the eyes of the  CEO Peter Ludvigsen (Søren Malling).
For the freighter’s cook, everyday routine ends in a split second, when heavily armed pirates force the tiny crew into the hold and point rifles at their heads. Mikkel slips into shock and appears numb as his every move is followed by a threatening pirate who enjoys in prodding him with his gun barrel. Fear gives way to misery, claustrophobia, disgust and nausea.  A Hijacking depicts these feelings and events very realistically, so much so, that I was completely anxiety ridden for the remainder of the film.
The CEO of the company, Peter Ludvigsen, is a sharp business man with a strong sense of personal responsibility for the crew; he insists on handling the mediation himself rather than handing the duty over to a professional pirate negotiator.
The endeavor of trying to solve this real life-or-death situation happening thousands of miles away and of negotiating with unreliable characters puts enormous pressure on the CEO. What follows is a seemingly endless and distressing chess game that goes on for weeks, and then months, putting the CEO now under even more pressure by the members of the company’s board, who feel he is neglecting his other duties as the chief officer of the corporation.
A Hijacking has very few incidents   of violence; it is more powerful because of it. The Somali pirates are almost anonymous except for their “interpreter,” Omar (Abdihakin Asgar), who constantly denies that he is one of them; but we, the audience, know better because he delivers messages from unseen leaders.  How little we know about the pirates makes them a more menacing foe. The actors do not look like movie stars. They aren’t particularly good-looking, and their reactions to the events are genuine and true.
A Hijacking might be one of the best movies I’ve seen this year.
– Myrna E. Duarte
Grade: A-
WEBSITE: www.moviefiednyc.com
Facebook www.facebook.com/Moviefied
Twitter: @moviefiednyc
Submissions: moviefiednyc@gmail.com