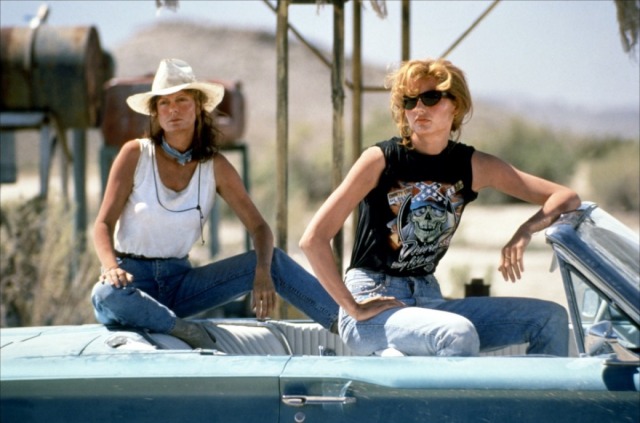 It is August 28th. How did that happen?! Summer is coming to a sudden and definite end. Soon the fall internships will be starting, students will head back to school, and all the hard earned holiday hours will have been spent. If you have the time, energy, and money to get in one last getaway this summer, I recommend a road trip. Road trips have a sense of adventure, a close proximity to other passengers that enforces a type of bond, or if you decide to go it alone, a large piece of time within which you can gather your thoughts and sense of self.  Road trips have but a few necessary essentials: an unbelievable soundtrack and great snacks. Route 66 may have been removed from the United States Highway System but it will forever remain in our hearts. With that in mind, MoviefiedNYC gives you the Top 5 Road Trip Movies to inspire your summer getaway.

A man went looking for America. And couldn’t find it anywhere..

Peter Fonda and Dennis Hopper play two bikers who set out on a road trip across America to attend Mardi Gras in New Orleans. During their travels they discover the many faces of the United States: bigoted sheriffs, small minded red necks, open minded hippies, and friendly prostitutes. On their travels they meet a drunken lawyer, played by the wonderful Jack Nicholson, who joins them on their trip of spiritual freedom. The three men experiment with marijuana, LSD and a little prayer but in the end they are disappointed in themselves for getting caught up in the drugs and not in their spiritual freedom.

Buy the ticket, take the ride.

A bald Johnny Depp ingests mass amounts of hallucinogenic drugs while an over weight Benicio Del Toro picks up hippy hitchhiker Tobey Maguire on their road trip to Las Vegas. On arrival they meet a young Christina Ricci who paints Barbara Streisand portraits. Trippy enough for you yet? Fear and Loathing is quite possibly the ultimate drug induced road trip movie of all time. As the tag line reads: “Give us your brain for two hours and you will never be the same again…”

Somebody said get a life… so they did.

Thelma & Louise is a road trip movie that focuses on love, friendship, loyalty, and a near naked Brad Pitt. Susan Sarandon and Geena Davis play two best friends who have been mistreated by husbands, boyfriends and life in general. During their road trip, a rapist turns his attentions on Thelma until Louise steps in to save her; she shoots the man and the two friends go on the run together. Although they are being chased down by the law, the two women find a sense of empowerment and freedom like never before.

Everyone just pretend to be normal

This indie-adventure-comedy will melt your heart; it is a road trip movie that focuses on the importance of family, diversity and acceptance. Little Miss Sunshine is the story of Olive Hoover, played by Abigail Breslin, and her family of misfits. Olive finds out that she has won a place in the Little Miss Sunshine Beauty Pageant in California and so her stressed out mother Toni Collette, failed self-help promoter Greg Kinnear, heroin addicted grandfather Alan Arkin, Nietzsche obsessed brother Paul Dano and suicidal uncle Steve Carrell hop into their slightly broken down Volkswagen to reach the competition in time. Olive’s performance is not to be missed.

Harold and Kumar are best friends, room mates and, most importantly, stoner buddies. One night while the two men unwind they get the munchies and see and advertisement on TV for White Castle. The two men embark on an adventure for those little square burgers that includes a crazy Neil Patrick Harris, a pack of Extreme Sports, bullies and of course their beautiful neighbor Maria. This road trip movie isn’t so much about self discovery, family, and freedom as much as it’s about delayed gratification and endurance whilst craving fast food.

Don’t forget to tweet us @MoviefiedNYC and let us know what your favorite road trip movies are!