Written by Andy Bellin and directed by Rob Epstein and Jeffrey Friedman, Lovelace tells the story of Linda Boreman, better known as Linda Lovelace, one of the most famous porn stars in the world. If nothing else, the film does a terrific job of shattering audience expectations; while most filmgoers were bound to expect a tawdry show of explicit nudity, what they got was a story about a woman who fought for her life and her dignity despite the odds.
Amanda Seyfried is no amateur; she has starred alongside A-list actors such as Hugh Jackman, Meryl Streep, and Julianne Moore; but never before has she shined as she does in Lovelace. Seyfried transforms herself multiple times throughout the film and despite a weak script, she transcends the film’s limitations by giving a performance that brings life to the the persona of Linda Lovelace. Peter Sarsgaard plays Lovelace’s notoriously abusive and terrifying husband, Chuck Traynor, to perfection. His portrayal as a drug-addicted pimp is haunting; he is a user with no control over his emotions or regard for his actions. He whores his wife out to make money and then beats her for it. At the same time he plays a charmer who wins over both Linda and her parents with an easy smile and a smooth line. 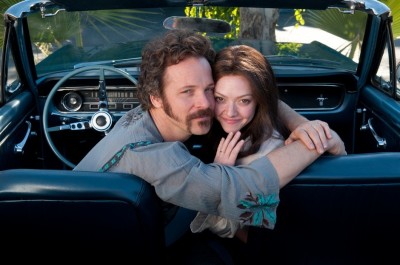 Notable cameos are played by James Franco as Hugh Heffner and Adam Brody as Harry Reems, Linda’s Deep Throat co-star. While these performers are talented, they only serve to distract from an already heavily star-studded cast. The audience is pulled away from the world of Lovelace and forced to acknowledge the presence of these big-name stars. In comparison, Sharon Stone is almost unrecognizable as the strict, Irish Catholic  mother whose unglamorous performance leaves the audience heartbroken.  Robert Patrick gives a fantastic performance as he strays from his usual bad boy role to play Linda’s sweet but ineffective father. One performer that viewers will undoubtedly take note of is Chris Noth, who finally proves that he is more than “Mr. Big.” Noth plays the mob boss/producer Anthony Romano to an almost justifiably violent t.
Robert Davla and Matthew Landan deserve recognition for their work in editing this non-linear film as they placed each scene in such a way that we meet Lovelace at several different points of her life. In one scene, we are introduced to a fresh-faced teenager; she fights with her mother and hangs out with her best friend Patsy, played by the lovely Juno Temple. In the next moment, the scene jumps and we see Lovelace with soulless eyes, pale skin and limp hair hooked up to a polygraph as she explains the series of horrific events that have occurred throughout her life. The juxtaposition of these scenes is both jarring and effective in illuminating the truth behind the myth of the biggest star in pornography.

Another technique employed throughout the film is the repetition and retelling of previously shown scenes. At first we see a charmingly comedic moment, which is later replayed from another perspective to reveal the depressing truth of Linda’s situation. These scenes are true to life as they present a happy picture of domesticity, of which the dark undertones of abuse are hidden, only to be revealed too late. The film honors Lovelace as a woman who spent a very small percentage of her life as a porn star and a large percentage as an abused wife, daughter, and human being. Despite all odds she fights against the fantasy image that has been pressed upon her by the public, by the laws that ignore her struggles as an abused wife, and by the archaic rules her mother emplaced upon her to become a fighter, a survivor, and a hero to those who have suffered at the hands of an abuser.
– Sinann Fetherston