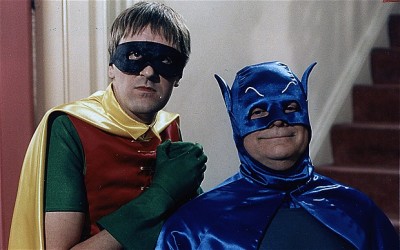 There’s something about British humor that just hits the right spot. It can be layered and cultured while simultaneously snarky and sarcastic. It celebrates the ordinary and benign with lashings of innuendo and satire. No subject is too taboo and no person is safe from ridicule. While America has its heroes, the British celebrate the deadpan down and outs. Britain has supplied the world with some of the best television to date from the absurd Monty Python to the ordinary Only Fools and Horses. In recent years, it has delivered everything from the supernatural Misfits, the darkly realistic Skins and the fantastically surreal Spaced. They have TV down pat, but what about the movies?

The wonderful Richard E. Grant and Paul McGann play Withnail and Marwood, two actors who are down on their luck and deep in their alcohol. They tire of the dank, squalid conditions of their Camden flat and decide to venture out to the countryside to visit Withnail’s uncle Monty’s cottage. Unsurprisingly the trip doesn’t go as planned and the two hit a series of hilarious obstacles. The script is beautifully written as it has two dirty, unemployable alcoholics who sometimes manage to speak with a kind of almost eloquence. Marwood: “We are indeed drifting into the arena of unwell. Making an enemy of our own future. What we need is harmony, fresh air, stuff like that.”

If comedy has royalty it could be found in Life of Brian; the cast includes Graham Chapman, John Cleese, Eric Idle, Terry Gilliam, Michael Palin and Terry Jones. In fact, much like Monty Python and the Holy Grail (1975) and The Meaning of Life (1983) these actors not only starred in the film but between them, they wrote and directed it. These men were made to create and perform and they do so with complete ease and natural talent. The film is full of easy laughs and absurd humor while it follows Brian, the mistaken Messiah. The tagine reads: “A motion picture destined to offend nearly two thirds of the civilised world. And severely annoy the other third.” This statement wasn’t far off as John Cleese and Michael Palin eventually had to appear on BBC Four to defend the film’s purpose. They did so quite brilliantly.

Brad Pitt plays an Irish pikey. As an Irish person, this is genuinely one of the funniest things I’ve ever seen. If theres one thing you can depend on Guy Ritchie for, its great characters. While Lock, Stock and Two Smoking Barrels had Soap, Tom, Eddy and Bacon, Snatch follows up with Turkish, Brick Top, Bullet Tooth Tony and Franky Four Fingers. The superb cast, including Benicio Del Toro, Vinnie Jones, Jason Statham and Denis Farina, work together to create a gangster comedy like no other.

4. Shaun of the Dead

I first discovered the genius of Simon Pegg and Nick Frost in Spaced, the TV show Pegg co-wrote with actress Jessica Hynes. The off beat, often surrealist, comedy was saturated with pop culture references and witty banter. Next came Shaun of the Dead, a movie that took the age old idea of a zombie apocalypse and re-worked it so that two ordinary blokes, with a love for the pub, replaced the classic surviving hero. Tagline: “Buy Milk. Ring Mum. Dodge Zombies”.

Bill Nighy, Emma Thompson, Hugh Grant, Keira Knightley, Colin Firth and Martin Freeman are just a few of the actors that populate this holiday flick. Could you ask for a better British cast? The story intertwines several connecting stories of couples, friends, families and loved ones as they try to get through the hectic month leading up to Christmas. Love Actually is filled to the brim with stand out comedic scenes, but the absolute best has to be Bill Nighy stripping down to his socks on live TV while singing “Christmas Is All Around”. Richard Curtis does it again.