Believe it or not, over five million people take the NYC subway every day. Together, we straphangers form something of a subterranean family: a couple of times a day, we call the subway car our home; we avoid eye contact, don’t talk to each other, get into an occasional yelling match; a typical dysfunctional family living in a world contained in a tube. New Yorkers have a love/hate relationship with the subway. On the one hand, it’s dirty and rat infested; rush hour is like the running of the bulls, and it’s a freakin’ oven in the summer. On the other hand (and somewhat ironically), it’s actually a place to be alone. Thanks to portable media, it’s easier than ever to check out and read a book, listen to music, watch a movie, and most importantly nod off. 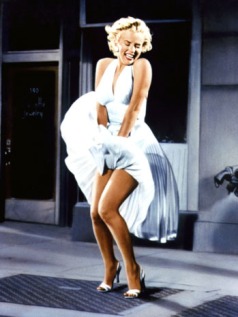 As a couple of New Yorkers who’ve spent more time than we could possibly count speeding through a hole in the ground, we’ve each compiled lists of our five favorite New York City subway movies. There are countless films where the subway has played a significant role: The Naked City (1948), The French Connection (1971), Ghost (1990), Godzilla (1998), and Bananas (1971) just to name a few. Here are the films that have affected us in one way or another, either by transporting us to dangerous 1970s NYC (represented here by five films in on our combined lists), or thrilling us as we hide from monsters or, wowed by unforgettable cinematic moments with Monroe and Travolta.
—John David West

Following a citywide gang meeting in the Bronx that goes bad, the Warriors are falsely accused of assassinating Cyrus, the leader of the Gramercy Riffs. It’s a long journey home for the Warriors—who travelled all the way from Coney Island to the bad-ass Bronx, and now they must get back to their own turf, making this the ultimate NYC road trip film. The opening credits of this cult classic play like a music video as we are introduced to an unforgettable, what-were-they-thinking assortment of street gangs: there’s the Baseball Furies decked out in New York Yankees uniforms with their faces brightly painted as they silently run about like angry Yankees mimes; the army size, “Kung Fu” fighting Gramercy Riffs; the denim-overalls clad Punks, led by a roller-skating, switchblade wielding banger; the all female Lizzies (need I say more?), and, of course, The Warriors, wearing open leather vests revealing bare chests. No matter how you look at it, following the Warriors is a good time in the NYC subway. Can you dig it?

Now, this is important—I’m talking about the version with Robert Shaw and Walter Matthau, not the 2009 remake with John Travolta. As if the dangerous, dirty, graffiti battered NYC subway wasn’t bad enough, four men wielding semi-automatic guns hijack a subway car and demand a million dollars in exchange for the release of the passengers. With all of the grit that you’d expect from that era and some great location shots, the original Pelham is a must for any fan of 1970s NYC movies. Check out Union Square East near the film’s end. (Not a Sephora or a Barnes & Noble in sight…)

Death Wish plays like an early ’70s NYC travelogue, as successful architect Paul Kersey (Charles Bronson), takes revenge on local criminals for murdering his wife and raping his daughter. While one might argue that the film advocates gun violence and vigilantism, it’s hard not to enjoy watching a regular Joe, alone on a train, gun down a couple of threatening muggers. In a city with rampant unemployment and a high crime rate, mugging was an unfortunate reality for too many New Yorkers; Death Wish seems to reflect the attitude of a crime-weary population looking for retribution on the big screen. 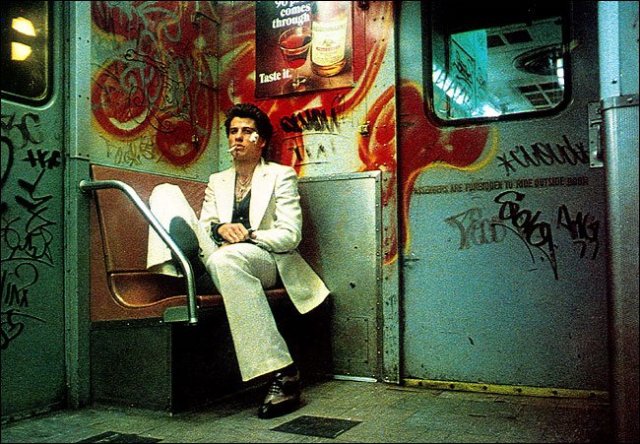 Saturday Night Fever managed to capture the vibe and angst of New York City’s dissatisfied youth of the late ’70s, who wanted nothing more than to escape from life’s realities and have fun at the disco. It’s a musical drama where the musical numbers happen without singing on the dance floor. It’s a time capsule of the very brief ’70s disco-era, and it’s what shot John Travolta from TV stardom to big screen stardom. But more than anything, it’s incredibly well made: perhaps one of the best New York City movies of all time. Though Saturday Night Fever is not a subway-heavy film like Pelham, this is a movie where an all-night subway ride brilliantly sums up Tony’s (John Travolta) growth as a character. Disillusioned and bruised, still wearing the iconic tight white suit, he leaves behind his friends in Brooklyn. As he sits alone in a graffitied subway car, while the Bee Gee’s “How Deep is your Love” plays in the foreground, he rides all night reflecting and ultimately realizing that he has to break away from his destructive Brooklyn life and build a new, perhaps “deeper” life in Manhattan.

Beat Street showcases the South Bronx, griffitied trains, break dancing, and rap, as this early hip-hop culture infused movie seems to take its inspiration directly from the 1983 PBS documentary Style Wars.  Featuring many young spirited artists including Seen, the one-armed graffiti writer Case, and break-dancer Crazy Legs of Rock Steady Crew, Style Wars was filmed in and around the graffiti “bombed” subway trains as it takes viewers into the tunnels, shows the artists tagging walls, painting subway cars, at home working on designs, and even at their own art exhibitions. The documentary asks the question, is graffiti vandalism or art?  Beat Street doesn’t get too deep but, like Style Wars, it’s an in-the-moment of a cultural explosion that’s shot on location and takes viewers into the subway tunnels and even inside a train car for some spontaneous breakin’. Consider both Beat Street and Style Wars as a Saturday night double-feature and immerse yourself in early ’80s NYC, hip-hop, rap, b-boy breakin’, outspoken Ed Koch yappin’, taggin’ and bombin’, and plenty of subway cars covered in eye-poppin’ “artistically inspired art,” yes art!

In The Seven Year Itch, director Billy Wilder immortalized the New York City subway in the scene where Tom Ewell (Richard Sherman) and Marilyn Monroe (The Girl) saunter outside the Trans-Lux Theatre as a gust of wind from a passing subway train blows Monroe’s dress up around her waist and reveals a glimpse of her underwear. No, that scene does not occur in the subway system, but it is thanks to the subway that we have one of the most iconic images of cinema history.

Directed by William Friedkin, The Exorcist a horrific story about devil possession and the subsequent exorcism of the demonic spirits from a young, innocent girl of a divorced family. The subway in The Exorcist appears as a portal to the dark side in the psyche of guilt-ridden Father Karras who is tormented with remorse for not being present at his mother’s death and begins doubting his decision to become a priest.

After the lights are turned out as Father Karras falls asleep, a montage of dreamy images flash through his consciousness, mixing glimpses of his mother and her ascent and descent into death with the same surrealistic images taken from previous scenes accompanying Father Merrin in Iraq: a free-falling Christian medal: a ferocious, growling desert dog running toward the camera; Karras’ mother staring straight ahead; the pendulum of a clock swinging. Suddenly, Karras’ mother rises from an underground subway in New York City; he waves from a traffic island toward her, and though his mother calls out, she doesn’t see him. As a ghoulish, ghostly-white demonic face appears, Karras pursues his mother across traffic on a busy street and she descends back into the subway entrance.

In another scene, Karras rises up from an underground stairwell, emerging onto a train platform where the tracks shoot jets of steam and we see a soft-drink vending machine emblazoned with the words: “TRAVEL REFRESHED.” On the dirty, trash-littered platform, he turns to hear a drunk begging with outstretched hand: “Father, could you help an old altar boy? I’m Cat’lick.” Too wrapped up in his own problems and unable to be charitable in this subway encounter, the Father turns away from the wretched man whose bearded, sweaty face is momentarily illuminated in flashes by the window lights of a passing train.

The French Connection was directed by William Friedkin (the second time he appears on this list) provides one of the most harrowing and memorable car chase sequences ever filmed. Car versus elevated train and no CGI anywhere to be found. The chase involves NYC cop ‘Popeye’ Doyle commandeering a civilian’s car and then frantically chasing an elevated train, on which a hitman is trying to escape. It was filmed in Bensonhurst, Brooklyn running under the D and B Line, which runs on an elevated track above Stillwell Avenue, 86th Street and New Utrecht Avenue in Brooklyn, with the chase ending just north of the 62nd Street station after the train crashed into another train up ahead.

William Friedkin’s police drama portrays two tough New York City cops trying to intercept a huge heroin shipment coming from France. An interesting contrast is established between ‘Popeye’ Doyle (Gene Hackman), a short-tempered alcoholic bigot who is nevertheless a hard-working and dedicated police officer, and his nemesis Alain Charnier (Fernando Rey), a suave and urbane gentleman who is nevertheless a criminal and one of the largest drug suppliers of pure heroin to North America. 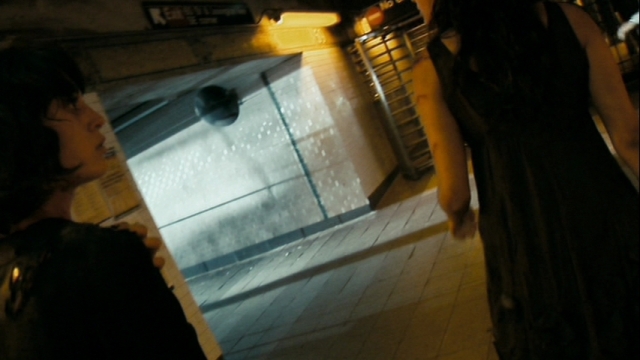 Directed by Matt Reeves, Coverfield follows five New Yorkers from the perspective of a hand-held video camera. The movie is exactly the length of a DV Tape and a sub-plot is established by showing bits and pieces of video previously recorded on the tape that is being recorded over. The movie starts as a monster of unknown origin destroys a nearby building. As these five friends go to investigate, parts of the building and the head of the Statue of Liberty come raining down. The movie follows their adventure trying to escape through the New York City subway system and to save a friend, a love interest of the main character.

A good portion of Cloverfield takes place underground, as the movie’s core group of friends makes their way up the pitch-black 6 train tracks from Spring and Lafayette to 59th and Lex. They are attacked relentlessly in the tunnel by quick-moving monster parasites and one of them is finally bitten. If you are like me always wonder what else lives in the subway tunnels.
5. Below New York (2011)

Below New York, directed by Matt Filin, is a unique and stylized look at some of New York City’s finest subway musicians, performers, and artists. Through a series of polished vignettes, the film draws the audience into the lives these local performers lead, and shows how their quest for a venue and sustenance adds a truly wonderful aesthetic to one of the greatest cities in the world.