With A Good Day to Die Hardopening tomorrow, I figured it was a good idea to quickly run through the series as a whole while leading up to its release. This week, I’ll talk about the first two movies – Die Hard and Die Hard 2: Die Harder. There’s not much to say at this point about the series that isn’t old hat, but if nothing else, I’ll at least get the chance to submit my opinion to the internet for posterity. 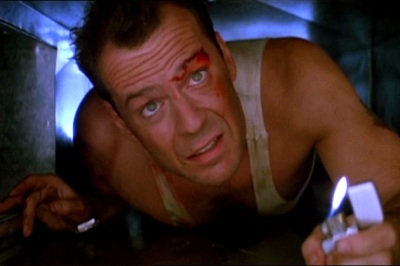 What can I say? Die Hard made killing terrorists with vaguely European accents and a flair for the dramatic fashionable. I think everyone knows that by now, which is why we have 8 million other action movies that take their cues directly from this classic. Air Force One is “Die Hard on a plane,” Under Siege is “Die Hard on a boat,” etc. Basically, any time you see a hero in the wrong place at the wrong time, that movie is probably borrowing from Die Hard. So, what is it about this movie that brings about such admiration and imitation?
Well, for starters, there’s Bruce Willis. In the role that shot him to stardom as Detective John McClane, he plays the wise-cracking good guy with a gun, only without any winks or nods to the audience. Every reaction from him feels genuine, down to his most famous line, “Yippie-ki-yay, mother fucker.” Dialogue aside, he’s every bit a man in over his head, but he knows if he can’t get the job done, nobody can.
What job is he getting done, exactly? Why, stopping Hans Gruber (the glorious Alan Rickman) and his band of robbers from killing 30 hostages and making off with over $600 million, of course. I mean, the cops certainly aren’t going to help, since they’re being led by the principal from The Breakfast Club (Paul Gleason) and the bad guy from The Goonies (Robert Davi). Throw in Carl Winslow from Family Matters(Reginald VelJohnson) as McClane’s only radio buddy, and the cast is pretty great, actually. Fun fact: there are two actors (yes, two) from the Ghostbustersmovies in Die Hard, which is a reason in-and-of-itself to watch it. Can you spot both of them?*
Die Hard – Trailer
Die Hard is perfectly paced, has a true man’s man in the lead, boasts believable and ruthless villains, and, unless you’re a vampire sailor, it contains enough blood and swearing to last a lifetime. In three paragraphs, that just about sums it up as well as it ever will be. While the series comes close to recapturing the magic a couple of times, Die Hard remains the crowning achievement in badassery.
*In case you’re too lazy to guess and/or look them up, the Ghostbusters actors are William Atherton  (Walter Peck in Ghostbusters) and Wilhelm von Homburg (Vigo in Ghostbusters II).  That’s right; I bet you had no idea that Vigo got off of his throne of blood to be in this!
Die Hard 2: Die Harder
Despite the stupid title and the obviously formulaic rehashing of the first movie, Die Hard 2: Die Harderis a fun one. There are a lot of good actors all over the place, and while the movie gets bogged down in tedium around the middle section, the third act makes up for that with snowmobiles, exploding planes, and Franco Nero getting into a firefight with Bruce Willis. 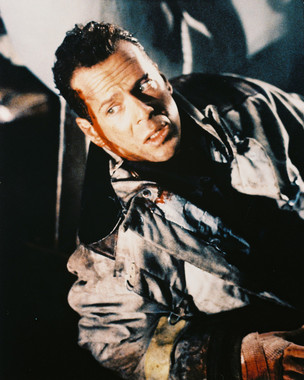 As you probably suspect, John McClane ends up at the wrong place at the wrong time yet again, but this time it’s at an airport in D.C. While waiting for his wife’s plane to land, he spots some suspicious activity, and before long, he’s crushing people on conveyor belts and getting shot at by armed mercenaries. The plot has to do with a deposed general who’s being extradited the United States and who happens to have some sympathetic ears inside our army, including a Colonel (William Sadler) who’s rounded up a group of mercs to hijack the entire airport in order to secure the general before he’s handed over to the authorities. Once McClane catches wind of this, it’s Nakatomi Plaza all over again, only not quite as bad ass.
This time around, Willis goes through the motions a little bit. Especially when he’s talking to himself, his dialogue isn’t as natural as it was in the first movie. Fortunately, McClane has an even bigger asshole to contend with on the law enforcing side than he did before, with Dennis Franz supplying the bureaucracy constantly butting heads with him. If nothing else, Franz coaxes out the great line by McClane, “What sets off the metal detectors first, the lead in your ass or the shit in your brains?” While I’m not entirely convinced that shit can set off metal detectors, it’s worth seeing Franz’s face after he drops that bomb on him.
Die Hard 2: Die Harder –Trailer

The action has its ups and downs; honestly, there’s not a lot of it until the last act. Once he finds where the terrorists are holding up, however, it gets a lot more fun. At one point, McClane even shoves an icicle in a man’s eye and then breaks it off while it’s still inside his ocular cavity. The violence is suitably bloody (obviously), which goes a long way since it doesn’t ramp up until the end.

Overall, it’s not a bad early ’90s action flick. Bruce Willis was starting to come into his own, and he reprises his role without skipping a beat. A solid supporting cast, such as the aforementioned William Sadler (who was admittedly more fun as Death in Bill & Ted’s Bogus Journey), helps to chug the movie along as it slowly builds up to its climax. While it’s probably at the bottom of the series in terms of quality, it’s still not a bad time waster if you have two hours to spare. Yippie-ki-yay! – George Bell

Read more of George’s work on: