March has arrived with a major roar with several very anticipated features being released; The Lobster director Yorgos Lanthimos first English language feature, Midnight Special a Jeff Nichols joint and last but not least Knight of Cups a little ditty from Terrence Malick. It feels like the beginning of award season all over again. So whether you choose to checkout that indie movie you’ve heard so much about, or the latest big studio release, don’t forget to click on the movie title below to view the trailer. We want to make sure you know what you are getting into before you head to the theater.
-Myrna E. Duarte 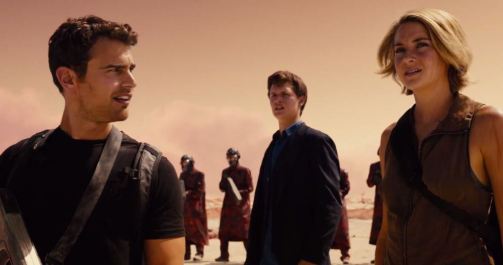 Stars: Shailene Woodley, Zoë Kravitz, Theo James
Directed By: Robert Schwentke
Synopsis: Beatrice Prior and Tobias Eaton venture into the world outside of the fence and are taken into protective custody by a mysterious agency known as the Bureau of Genetic Welfare.
Our Two Cents: Are we still interested in this?

Stars: Quentin Dolmaire, Lou Roy-Lecollinet, Mathieu Amalric
Directed By: Arnaud Desplechin
Synopsis: Paul is preparing to leave Tajikistan, while thinking back on his adolescent years. His childhood, his mother’s madness, the parties, the trip to the USSR where he lost his virginity, the friend who betrayed him and the love of his life.
Our Two Cents:  An emotional story about the unforgettable people we meet in life.

Stars: Ben Foster, Chris O’Dowd, Guillaume Canet
Directed By: Stephen Frears
Synopsis: An Irish sports journalist becomes convinced that Lance Armstrong’s performances during the Tour de France victories are fueled by banned substances. With this conviction, he starts hunting for evidence that will expose Armstrong.
Our Two Cents: One of the craziest cover-up stories in sports history, I’m in!