Ever since moping out of the theater in 2005, I’ve been waiting for a great Star Wars movie. For rabid fans, there has always been the Extended Universe and all the related fiction to keep them satisfied. But for people like me, who, up to this point, have only seen the live-action movies, ten years is a long time to keep the prequel taste in your mouth (it’s not like chicken). In fact, I’m not even holding out for a great experience anymore. I’m hoping for one that has more good than bad. In that respect, The Force Awakens hits the mark, though it does so by relying on Episode VIII to fix or lessen some of its problems.

The Force Awakens is, at its most basic, a search for Luke Skywalker. The Jedi master has been missing in action for years, and nobody knows where or how to find him. That is, until a piece of a map surfaces, which contains part of the breadcrumb trail leading to Luke. Both the rebels and the First Order (the Empire with a new-ish attitude) are doing everything possible to locate the map, and this chase sets the gears in motion.

John Boyega (Attack the Block) plays Finn, a former Stormtrooper who grows a conscience. Don’t worry, this happens in the first minute or two, so you’re not getting anything spoiled. Finn’s defection eventually leads him to meet Rey (Daisy Ridley), a young woman living on a desert planet who’s barely making ends meet. There are some story beats that will be instantly familiar to anyone who’s seen A New Hope, but I don’t mind it at all. In fact, I welcome it.

For two reasons, I dig the callbacks to the original. First, they’re kind of a necessity. You’re still dealing with the same family from the original and prequel trilogies, which means that familiar feeling will happen no matter what. These days, it’s not a foregone conclusion that everyone knows the characters of Han Solo, Leia, Chewbacca, etc., so they have to be shown and set up. What else are you going to do with a story centered around such iconic people who did amazing things? Secondly, J.J. Abrams did a better job this time around. He last pulled the digging-into-canon trick with Star Trek: Into Darkness, but where that travesty is ham-fisted and way too on the nose, The Force Awakens feels fresh despite the nostalgia trip.

Speaking of fresh, I don’t know where they found Daisy Ridley, but that casting person deserves a raise, or a bonus, or something. Ridley plays Rey, one of the most bad-ass female protagonists I’ve seen in a flick like this in quite some time. Right from the get-go, it’s clear she doesn’t need any handholding, even though she’s obviously in over her head. Ridley plays her as a confident woman who isn’t afraid to step out into the unknown, but she’s never snobbish or nasty about it. She feels like a Star Wars character, and one I can’t wait to see more adventures from.

Along the way, Rey and Finn meet up with Han Solo and begin looking for Luke together. Han’s introduction could have been handled better, but once he’s there, it’s like he never left. To be more accurate, it’s like he was never frozen in carbonite. I never liked him in Return of the Jedi, and I’m extremely happy to report that Harrison Ford does not phone it in this time. He is awesome, end of discussion, and you should thank your lucky stars the powers-that-be were able to coax words out of his mouth that were not part of a mumbled, half-asleep narration.

What about the villain? Well, he’s kind of a mixed bag depending on how much you buy into his backstory. Adam Driver plays Kylo Ren, a dark Force user who is hunting Luke Skywalker, and, by extension, Finn, Rey, and Han. I think reactions to this character are far from unified, but I, for one, love what was done with him. All I can say is that he’s a psychotic bastard, and I don’t mean that in some colloquial meaning of “psychotic.” He’s out of his mind, which I like on its own, but he’s also young. He’s certainly no Darth Vader, though he could be, given enough time.

Whether or not you buy into Kylo and the darkness inside of him depends on how much you’re willing to just roll with a character as-is. If you’re like me, you’ll find his development lacking but not totally dead on arrival. I can see Episode VIII alleviating a lot of this through flashbacks or some other storytelling device, but it will have to deliver in order for me to get fully behind Kylo as a scenery-chewing baddie. Where he is at the beginning of The Force Awakens is comparable to a character at about the mid-point in their arc, so there’s still a lot of ground to cover. 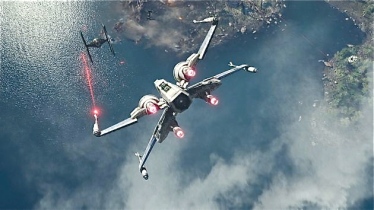 Regardless of who is swinging a lightsaber or choking the life out of stuffy British military types, The Force Awakens’ depiction of the Force is, no lie, exactly how I always pictured it in my head. It’s called the “Force” for a reason, and its effects are immediate and intense. Lightsaber duels fare equally well, as they actually feel like true swordfights. The saber hilts are large, awkward devices that require extreme care, or, you know, you’ll lose that eye your mother always said you would. Gone are the whirling dervishes of the prequels, who clash weapons at light speed while balancing on floating pieces of debris amid a river of lava. What’s on display in The Force Awakens can be favorably mentioned alongside the Luke/Vader duel in Empire, and that’s not praise to be taken lightly. It’s stunning to watch.

So, do I like the movie? Yes. It’s definitely Star Wars, and it’s far, far removed from the prequels. It misses an opportunity to flesh out the plot, and instead hopes the audience gets enough of Kylo Ren’s history through osmosis and lots of shrugging of shoulders, I guess. The visuals and sound are everything you could hope for and more, and though some people are currently complaining about it being too much like the original movie, I think we’re in a pretty good place when the most damning criticism is that it needs to be less like the best in the series. I feel like this review is incomplete, since the story issues can be ironed out in the next movie, but I have to have an opinion of some kind. It’s a good movie, and for me to become more polarized one way or the other, I’ll have to see it again. For the first time in a decade, I’m more than happy to oblige. 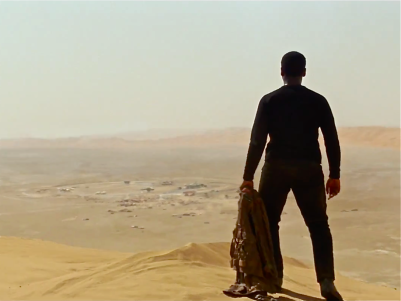