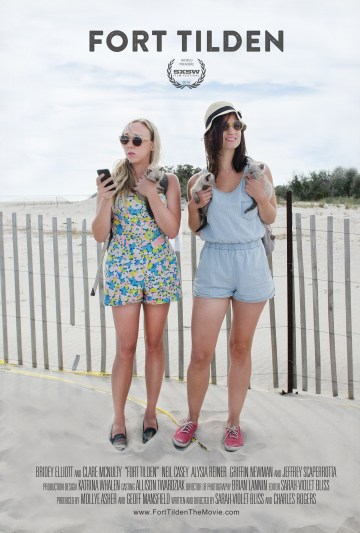 You will never realize how much of a pain it is to get to somewhere as simple as the beach until you have seen Fort Tilden, an indie dark comedy from first time writer-directors Sarah Violet-Bliss and Charles Rogers. Bliss and Rogers have together constructed a film that seems to be an awkward mash-up of Comedy Central’s Broad City and HBO’s Girls—and, honestly, I could stop right there because once you imagine that, you’ve basically seen the whole film.

Hey, let’s talk to these guys. They don’t seem like terrible

Allie and Harper are friends and roommates who, after meeting two guys who are going to Fort Tilden beach the next day, decide to follow them there—on bikes. This involves Allie (played by Clare McNulty) calling in sick for an important meeting between her and the Peace Corps, as well as Harper (played by Bridley Elliot, sister of SNL alum Abby Elliot) finding her independence. This is the entire movie in a nutshell but surprisingly, these actresses offer laughs as they grow up along their hellish ride. ​

McNulty and Elliot work well together and both definitely show they can be good comedic actresses in what is the first feature film for both actors. They are committed to their roles, they are smart when they need to be, ditzy at other times, and they are not afraid to succumb to the weird tone of the film. They are the reason to see this movie and I can easily imagine both actors will go onto doing good work in other comedies.

Despite McNulty and Elliot’s strong showing in Fort Tilden, I can only imagine this movie will mostly appeal to those who love HBO’s Girls, which immediately came to mind while watching Fort Tilden. It truly does take the structure of Broad City, stretches it to ninety minutes, and then gives it the tone and humor of a dark comedy by making both the main characters and world they inhabit much more edgy. Overall, it turns out to be a sometimes funny, oftentimes fearless, but ultimately too long, comedy. There are some scenes that dragged for me, but I was consistently smiling and interested in how far they were going with certain ideas and humor. I didn’t expect most of the film’s events to happen, which surprised me and ultimately made me laugh. Though there is a part of me that feels the film might have worked better as a thirty-minute sitcom, yet it works fine as a feature film.

Judging by the trailer, if this looks like something you’d like, then you will probably enjoy it fine. It’s well acted and well shot but I would not be surprised if the primary reason for making this film was to get jobs on HBO comedy shows.