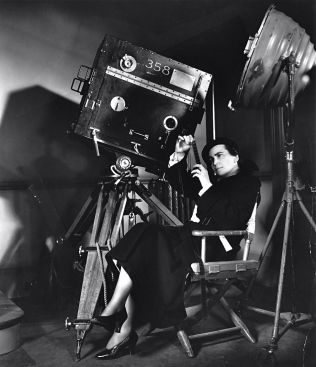 MoviefiedNYC celebrates Women’s History Month with a look at some of film’s great women. We are starting with director, Dorothy Arzner. Starting her career in the early days in Hollywood as a typist at Paramount Pictures, Arzner worked her way up through the ranks as a screenwriter and as a respected editor (Blood and Sandstaring Rudolph Valentino). She eventually moved into working as a feature director.

During the pre-code days before 1934, her films featured women who were always strong and free-spirited. These included Paramount’s first talkie, which starred Clara Bow, The Wild Party (1929), Sarah and Son(1930), and later at RKO, Christopher Strong (1933), which featured Katherine Hepburn—in her second movie—as a female aviator.

However, in 1943 Arzner stopped making feature films altogether. It’s still unknown why she stopped, perhaps a result of the strict Hays Code and Hollywood’s eventual return to more conservative, traditional gender roles that were popular following World War II. In her later years she taught screenwriting and directing at UCLA until she died in 1979.

We are grateful to historic women like Dorothy Arzner, whose groundbreaking work in Hollywood paved the way for future (well, we still have a long way to go) women directors.