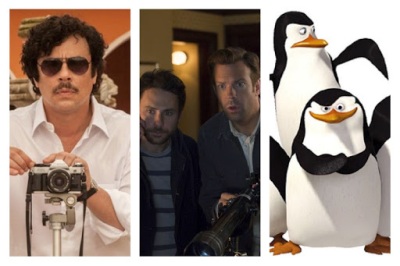 November is peak movie time, really: we find ourselves in the center of award season build up, and for the most part the films are truly breathtaking – there’s always one that holds you and just won’t let go. I remember seeing Her about this time last year, and so my expectations are naturally high – don’t let me down, Interstellar!

So, whether you choose to checkout that indie movie you’ve heard so much about or the latest big studio release, don’t forget to click on the movie title below to view the trailer. We want to make sure you know what you are getting into before you head to the theater.

Synopsis:  This film is no different from the first: three average joe’s attempt yet another crime with ‘hilarious’ consequences.

Two Cents: The highlight of this movie might just be Jennifer Aniston (did I really just say that?)

The Penguins of Madagascar (3D)

Synopsis: Our favorite team of animated penguins returns in the umpteenth sequel to the Madagascar franchise. In this action packed adventure, the penguins find themselves facing their most dangerous enemy yet: Dr Octavius Brine. Led by Skipper and their newly formed friend Agent Classified (Benedict Cumberbatch – I’m not kidding), the penguins must save life as we know it.

Synopsis: Josh Hutcherson plays a drifter who finally meets the love of his life in the form of Maria as he travels through Colombia. However, she is the niece of a local Robin Hood who deals in cocaine to deliver money to the poor, played by Benicio Del Toro. He is quite easily accepted into the family, but more and more is required of him by his new Uncle, who he begins to suspect is not all that Maria hopes him to be.

Two Cents: I see a bright future for Hutcherson.

Synopsis: Following the death of her husband, Amelia struggles to raise their son, a young boy convinced that a dark presence lurks in the house meaning to do the both of them harm. When a storybook reveals the creature the boy has been terrified of for so long, Amelia must confront the possibility that her son might not be seeing things after all.  .

Two Cents: Reviews for this say it is the best thing to come out of Australia in a long time, so definitely a must-see.

Synopsis: Richie, a washed-up, drug-addicted drifter, receives a call from his sister, asking him to look after his niece for a few hours, which he reluctantly does. However, his night takes a turn for the bizarre when his smart-ass niece calls him out on his lifestyle and his path.

Two Cents: Indie to the bones.