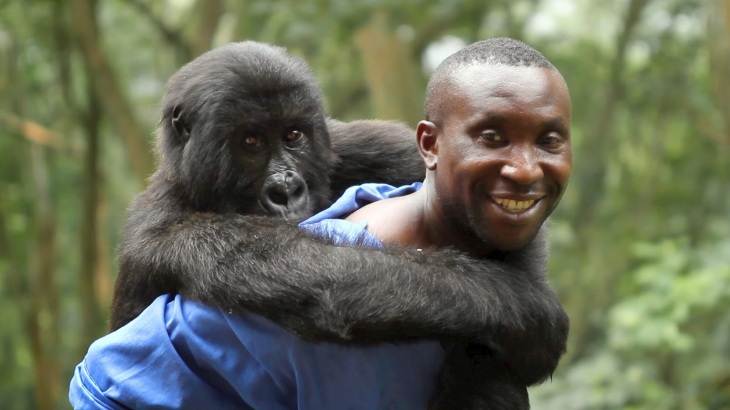 With nearly 7,000 films available on Netflix, picking something to watch can become an anxiety inducing ordeal. If you’re anything like us, you’ll scroll through every genre without finding anything you’re really in the mood for. Your “My List” would better off titled “Things I Might Watch, Eventually,” luckily, MoviefiedNYC is here to help. Here’s our pick of the best films that were recently released on Netflix Instant Streaming. 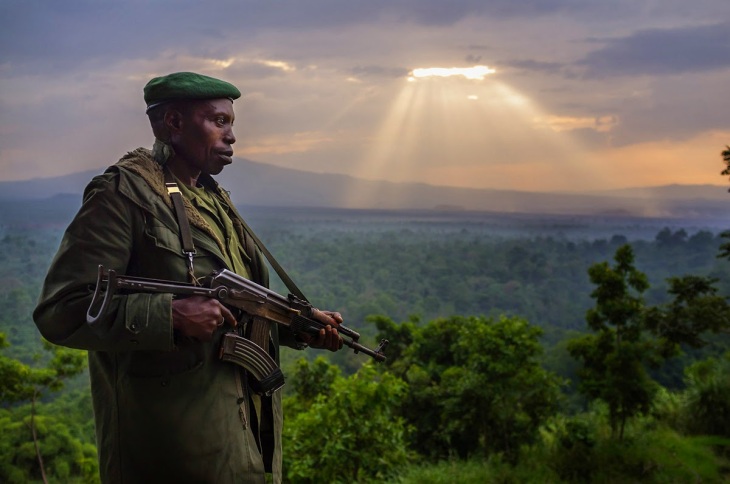 Directed By: Orlando Von Einseidel
“A group of brave individuals risk their lives to save the last of the world’s mountain gorillas; in the midst of renewed civil war and a scramble for Congo’s natural resources.”
Netflix’s latest original documentary is a powerful film about the conservation efforts in Virunga National Park, the home of some of the last mountain gorillas in the world who are caught in the middle of a conflict over the park’s natural resources. The highly emotional relationship between three young gorillas and their caretaker provides the backbone for this brilliant piece of investigative reporting, giving an element of human drama to a story that requires urgent attention. The film is a gripping portrayal of the struggle between those who would preserve the park’s natural beauty and those who would exploit it for its resources, namely the British oil company SOCO, who has obtained permission to search for oil in Virunga. Director Orlando von Einseidel and journalist Melanie Gouby reveal the shocking corruption and bribery of the local militias who seek to drive conservationists out by force, and the disturbing attitude of workers for SOCO with their complete disregard for the Congolese people. Virunga mixes beautiful National Geographic-esque shots of the park’s natural beauty that both captivate the viewer and reveal why the park is so in need of protection with hard-hitting investigative journalism and handheld camerawork that takes the viewer up close and personal with the conflicts both literal and economic. The film has elements of drama, mystery, and intense action all wrapped around an immensely important real-world issue.
Watch It 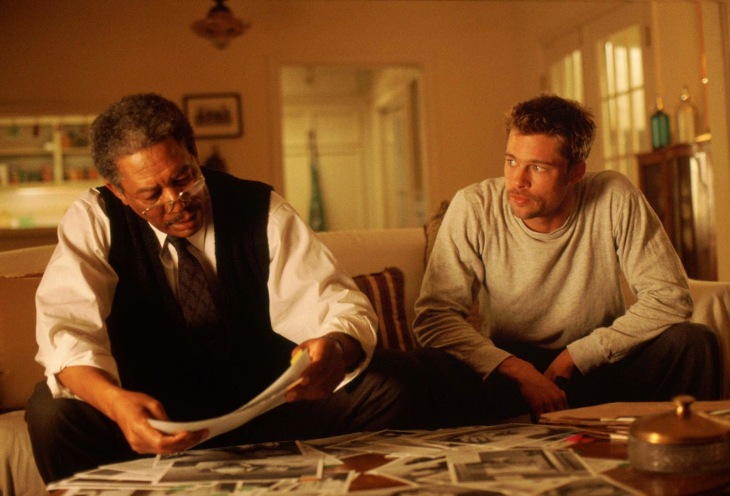 Se7en (1995)
Directed By: David Fincher
Starring: Morgan Freeman, Brad Pitt, Kevin Spacey
“Two detectives, a rookie and a veteran, hunt a serial killer who uses the seven deadly sins as his modus operandi.”
This dark, gripping thriller follows two detectives as they track down a sadistic murderer on a killing spree where each victim is killed for committing one of the seven deadly sins – gluttony, wrath, greed, sloth, pride, lust, and envy – in a way that related to their sin (for example, an obese man is killed by being forced to overeat). The film is predictable at times, with the plot of a relatively formulaic detective story, but where the film succeeds is in Fincher’s ability to create mood and atmosphere. Each murder scene is more gruesome and grisly than the last, all in a world reminiscent of New York at its grimiest that seems to be perpetually raining. The film also succeeds as a character study, with the wisdom and experience of Somerset (Morgan Freeman) juxtaposed with the gung-ho naïveté of Mills (Brad Pitt). Kevin Spacey has a particularly memorable performance as the film’s deranged but cunning killer. The film culminates in an iconic twist ending that you won’t want to miss.
Watch It 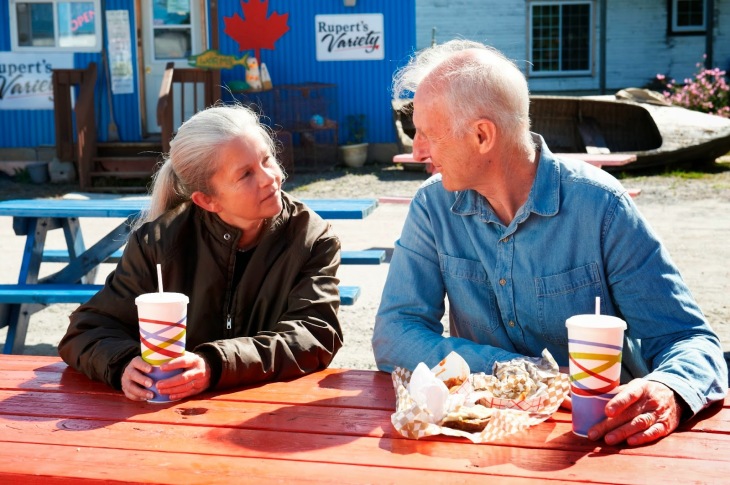 Still Mine (2012)
Directed By: Michael McGowan
Starring: James Cromwell, Ronan Rees, Geneviève Buchold
“An elderly couple fight against local authorities in rural New Brunswick to build their final home.”
Still Mine tells the story of real-life couple Craig (James Cromwell) and Irene (Geneviève Buchold) Morrison, a pair of farmers married for over 60 years and their relationship in old age. The central conflict of the film revolves around Craig’s attempts to build a more accessible home on their farm for his aging wife, fighting the building regulations that would have the local government tear it down. The film is an optimistic story about the enduring love between an elderly couple who has been through life together. This could be the best performance of James Cromwell’s prolific career (he has 167 film and television credits) and the two stars have remarkable chemistry, capturing a sense of true intimacy between Craig and Irene; both are stubborn, tough, and independent, and they are committed to living life on their own terms. Especially compared to other, often bleak films that deal with the same themes, like Michael Haneke’s Amour (2012), Still Mine is an inspiring and uplifting depiction of the struggles of old age.
Watch It 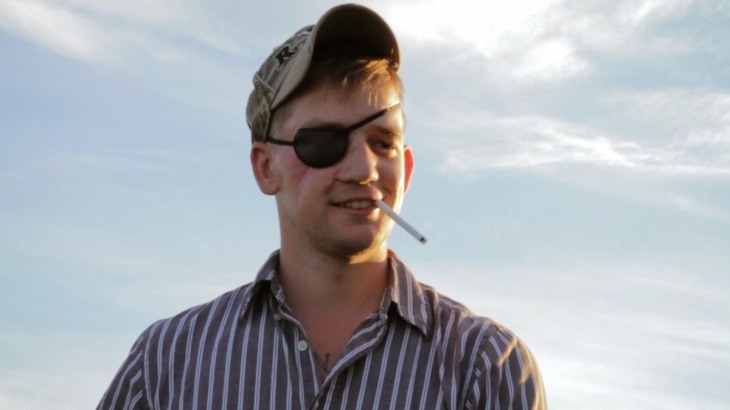 Not Yet Begun to Fight (2012)
Directed By: Shasta Grenier, Sabrina Lee
“In the space between war and a new battle, Not Yet Begun To Fight unfolds, offering an intimate look at the human cost of combat.”
This documentary packs an incredible amount of emotion into a short runtime (60 minutes) as it portrays the psychological effects of war through Warriors and Quiet Waters, a program started by ex-Marine Eric Hastings which aims to help rehabilitate soldiers struggling with PTSD through the meditative, peaceful activity of fly fishing on his Montana ranch. The soldiers in this documentary reveal wounds both physical and psychological; some are missing eyes, legs, or arms, while others have trouble with sleep, socializing, and speech. The film is hard to watch at times, but its important to understand how truly damaging war can be on the soldiers psyche and his soul. Not Yet Begun to Fight is a story about learning to life with trauma that can never be fully erased.
Watch It 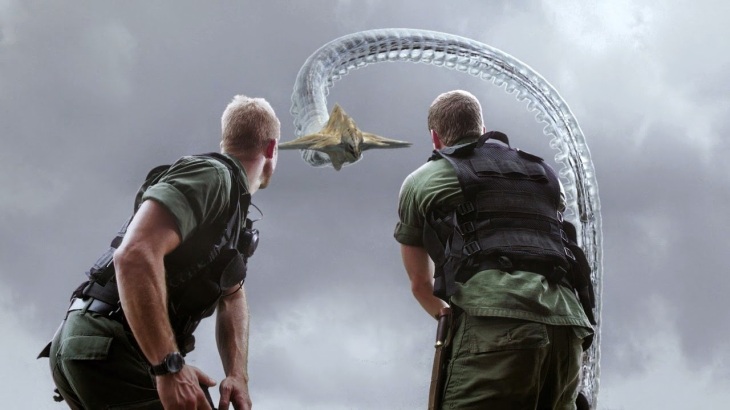 Bermuda Tentacles (2014)
Directed By: Nick Lyon
Starring: Trevor Donovan, Linda Hamilton, Mya
“After Air Force One goes down during a storm over the Bermuda Triangle, the United States Navy is dispatched to find the escape pod holding the President. A giant monster beneath the ocean awakens and attacks the fleet.”
Don’t let this recommendation fool you into thinking Bermuda Tentacles is a “good” movie, because it’s certainly not. This is the latest film by legendary B-movie studio The Asylum, famous for churning out low budget, low quality films that often mimic the title and plot of popular blockbusters in order to lure in customers (Snakes on a Plane vs The Asylum’s Snakes on a Train, Jack the Giant Slayer vs The Asylum’s Jack the Giant Killer). However they are best known for their monster/disaster films like Mega Shark vs Giant Octopus and its followup films, and the surprisingly popular Sharknado which was made for the Syfy television channel. This is the latest film The Asylum made for Syfy, in which the US Navy awakens a sea monster as they attempt to rescue the president from Air Force One, which went down over the Bermuda Triangle. Bermuda Tentacles is crazy, often nonsensical, and the dialogue and performances are quite literally laughable at times. It’s certainly not a well made film, but it’s fun to watch if you have the right expectations.
Watch It