Search
Changing up the intro a little bit this week in honor of Scandal. Olivia’s Fitz face is back, and therefore, all pictures in today’s post will be of her down-turned eyebrows and quivering lower lip (with one exception).
Monday, 10/13 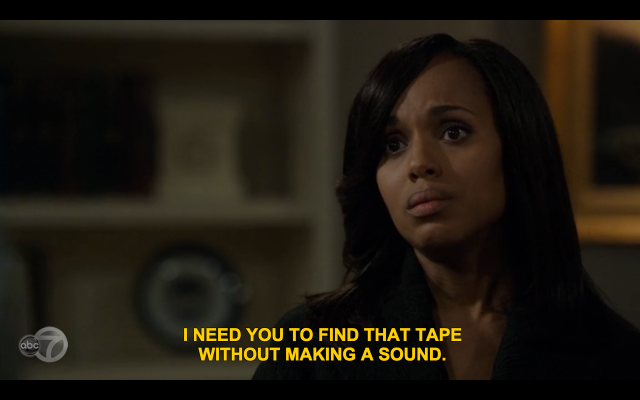 Gotham: Oh, Gotham. This show is really confusing to me, not because it’s too complex or anything like that, but because it’s so frustratingly simple. It’s as if they’ve taken the plot points from the animated children’s series and stuck them in a show for adults, which is pretending to be gritty and real but ends up being rather laughable. I feel like there’s no point in even recapping the plot because I’m sure you’ve already guessed it. Crime bosses are fighting for what happens to Arkham Asylum (they end up each getting what they want by sharing, which is how I feel most kindergarten fights are resolved), which is obviously why the Waynes were murdered, which is all an obvious conspiracy, which Jim is taking an excruciatingly long time to figure out. Every single connection these characters make seems so elementary, yet they seem genuinely shocked when they figure it out. Am I the only one who sees this, or am I just a jaded media critic? The only remotely interesting thing to happen this episode was Barbara coming clean to Jim about her romantic past with Renee, but even that grated on me. Jim gets angry, and Barbara asks him why. “Because she’s a woman?” Why does that even have to be a question? Aren’t we beyond that by now? Thankfully, Jim thinks it’s a stupid question too, because he says, “Because you lied to me.” And we move on, except when Barbara bring it up again and tells Jim she didn’t want to come clean for two reasons: one, that Renee works with Jim. Two, that she’s a woman. Cue me rolling my eyes. You’re on thin ice, Gotham. Worth watching? Probably not.
Sleepy Hollow: Ichabod can drive, and well, as we find out in this week’s suspiciously familiar episode of Sleepy Hollow (it’s like a mashup of Supernatural episodes—wendigo, anyone?). So the score we’re at in the ever-evolving Ichabod vs the modern world rivalry is somewhere around Ichabod- 3, modernity- 452. The Pied Piper (sort of) is this week’s villain, and not only does it steal a little girl (thanks a lot, cursed ancestors), but it turns out the mom is party to the whole thing. Hawley is also back, but how long he’ll stay on the show is up for debate. Everyone likes a Han Solo type though, and that’s the spot that Hawley fills. Irving realizes that his lawyer is the horseman of war (how did he not know that earlier I will never understand) but he’s signed a contract in blood, and it looks like Henry charges a hefty retainer. I’m sorry, I had to. In the end, Henry also ends up with the Pied Piper’s flute, which he clearly intends to use for nefarious purposes, though what exactly those are isn’t clear yet. Worth watching? Always.
Tuesday, 10/14 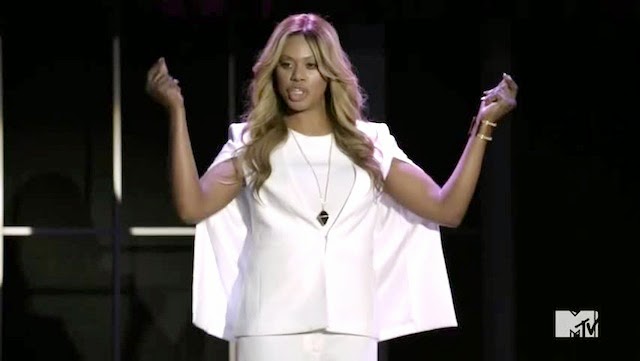 Faking It: This episode had so much to recommend it! A TV show featuring queer characters said the word bisexual!!! Laverne Cox (cue a choir of angels), Amy and Liam platonically bonding (cue whoops of glee), Karma dealing with things that don’t involve Liam or Amy (cue nods of approval), and Shane and Lauren dancing together again (cue respectful applause). This episode has two major subplots: Amy going to a party at Liam’s house to convince him not to tell Karma that they slept together, and Karma auditioning for the school’s drama club, headed by Laverne Cox. In the end, Karma doesn’t get in (I really hope that doesn’t mean an end to Laverne), but she does some soul searching along the way, and finally confesses that she was faking dating Amy (essentially using Amy to get attention, yet again, but I’ll give you a pass on this one, Karma). In the much more interesting Amy-centric subplot, Amy meets a probably-queer girl at the party (she’s really cute and I hope she pops up again) and tries to ruin Liam’s life. She succeeds, but instead of getting mad at her, he embraces it and we finally learn the big secret that Liam’s been keeping since day one: his absurdly rich but emotionally distant family is hiding the fact that Liam’s “sister” is actually his biological mom. What is up with this show and why can’t I stop watching it? Worth watching? Yes, and you would know if you just took my word for it and just gave in.
The Mindy Project: Finally, finally a lesbian character on the Mindy Project! And I’m pretty sure she’s going to be a recurring character, so I’m happy about that. This week, Mindy’s misadventures have her accidentally dating Dr. Fishman, who is the new chief of the hospital they’re associated with, and Mindy thinks she’s gay for about five minutes while everyone else tells her about their own gay moments. It was actually pretty great. Surprisingly touching was the bonding between Peter and Jeremy this episode, as they partner up for a beer pong tournament against reigning champion: Shonda Rhimes. Somehow, this all makes perfect sense to me. In the end, worth watching? Yes, and not just for Shonda.
Thursday, 10/16 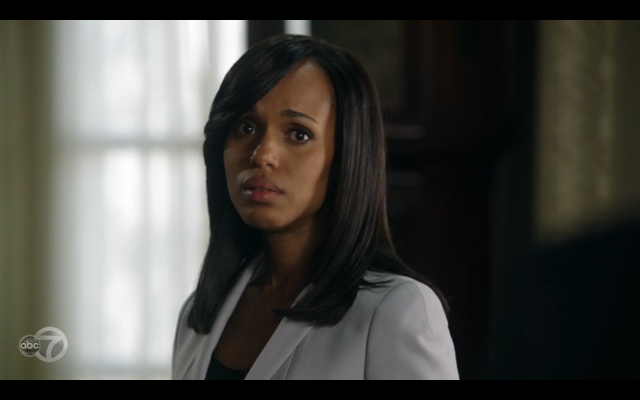 How to Get Away With Murder: This week, Connor and Michaela cry a lot, I’m proven right in my suspicions that Bonnie is queer, Asher continues to be the token straight white guy, and Viola Davis puts on the best performance of the entire series so far. Wes is chastised and then congratulated on his involvement with Rebecca, who had been coerced into confessing but then is let out on bail thanks to Annalise. The case of the week, insider trading, involves Connor in a personal way when he seduces the client’s assistant (in order to record him confessing) only to have him commit suicide after being found out. It was pretty intense, and unfortunately, things did not get better for Connor. Oliver, his kinda sorta almost boyfriend hears the recording, and kicks Connor out. So much for one of the only stable relationships on this show. But the real showstopper comes at the very end, where Annalise, now in possession of Lila’s phone thanks to Wes, gets ready for bed. She sits at her dresser and painstakingly removes her jewelry, wig, and makeup, and with each layer that’s removed the scene becomes more and more raw. And then of course, she turns around to face her husband, holds up the phone, and asks him why there’s a picture of his penis on it. Oops. Worth watching? Definitely.
Scandal: Scandal is jerking me around so much I feel like I’m riding a mechanical bull. Last week was awful, but this week was great! Mostly. The scandal this week revolves around the Fitz’s own daughter (yeah I kinda forgot she existed too) who made a sex tape. I actually really loved this because towards the end, when Mellie steps up to be a mother again, she gives her this beautiful talk about how if she had done it because it made her happy, she’d felt in control, and it was truly what she wanted, she would have supported her, and how unfair it is that women are judged so harshly by the same standards that men are glorified for. That was the crowning moment of this entire episode. On the downside, Fitz and Olivia has a Moment again (I managed to avoid it for three episodes but I guess it had to happen eventually), and the Jake/Rowan rivalry is tipped in Rowan’s favor as he sets Jake up for the murder of Fitz’s son. To be entirely honest though, I don’t care. They’re both pretty awful. All I care about this season is Mellie, and the return of Olivia’s “Fitz face.”
Sunday, 10/19

Brooklyn Nine-Nine: Obligatory Halloween episode this week! Like last year, Jake and Holt make a bet, but this time, by the end, it’s rewarding to see Holt totally rise to Jake’s challenge and win. He can’t be serious all the time. Gina and Terry bond this week, which means I wasn’t subjected to the awful and pointless Gina/Boyle subplot, so that’s a win in my book. Not much went on for the overarching plot or character development, but it was a really fun episode. Worth watching? Yup.
Revenge: Only three episodes in and I have made the executive decision to finally give up on Revenge. Worth watching? Not this week, and not for the rest of the season.

The Walking Dead: I’m so cautiously optimistic about this show right now. This week’s episode was no less gripping than the premiere. TWD really likes to make its characters mull and brood over what’s happened in the past, but for once I don’t mind because it means we get to see Carol struggle with what she’s done now that she’s back in the group. And in a beautifully written move, Daryl has now been positioned as Carol’s emotional support, in a reversal of their characters in season two. He’s the one telling her she can talk about it, that it’s okay. Their characters are probably the best-written ones on the entire show, from season one to now. The gang, which is all back together (except for Beth, who’s still missing—though Daryl and Carol set off to find her at the end of the episode), is trekking around when they run into a priest in the woods. He takes them back to the church he’s been hiding out in for months, and Rick is suspicious. When is Rick not suspicious, though? At this point I expect him to start accusing his shadow of misdeeds. This priest definitely has some dark secrets though, so I’ll give Rick the benefit of the doubt. In other plot-related news, they all agree to go to Washington to help find a cure, and at the end of the episode, Rick is again proven right (okay, maybe I should lay off Rick a little bit) when the survivors of Terminus kidnap Bob, chop off his leg, and eat it. I’m pretty sure Bob was bitten earlier in the episode though, so here’s hoping Gareth and the gang slowly turn into walkers, horror dawning on their faces as they realize what they’ve done. All in all, worth watching? Still can’t believe I’m saying this, but yes, and I’m actually looking forward to next week’s episode!
My hopes for this week actually came true, so I’m gonna keep this rolling. Tune in next week to find out if Daryl and Carol confess their love to each other, Gotham becomes even a little bit more interesting, and everyone in the world tunes in to watch Faking It and it becomes the most popular TV show this season.
—Mariana Zavala