Writer and director Seth MacFarlane (Ted, Family Guy) has taken scatological humor to repulsively infantile new lows with his comedy-Western, A Million Ways to Die in the West.  Some might attempt to compare this effort to Mel Brooks’s irreverent 1974 classic, Blazing Saddles, but that would be as unfair as comparing Porky’s to The Searchers. MacFarlane proves that, as a screenwriter, he has about as much creativity as a hyperactive thirteen-year-old boy who just entered the hormonal battlefield of puberty and recently discovered the F-word.

The story features MacFarlane as the film’s protagonist, Albert Stark, a cowardly, talkative sheepherder (in the vein of Bob Hope’s gutless characters), who is out of place in the dangerous 1882 Wild West (Arizona). He is soon dumped by his girlfriend, Louise (Amanda Seyfried); he later falls in love with an unlikely villainous gal, Anna, played by Charlize Theron. (It takes oxen-strength levels to suspend reality and believe that this clever, ethereal beauty could fall for MacFarlane. But, hey! Why not? Diane Keaton fell for Woody Allen in many of his films, and, of course, countless other squirrely, comic, writer/directors have had many an unapproachably hot babe as their love interests). So Albert eventually proves that he’s no longer a coward as he faces the Irish, gunslingin’ Clinch Leatherwood (Liam Neeson) in a duel finale that does have a rather smartish surprise.  Oops, did I give away too much?  Not really. You can predict every plot point five scenes ahead, or before MacFarlane can distract you with a line about a prostitute returning from her date in time to “do anal” with a regular customer.  . While this predictable story plays out, our thirteen-year-old boy throws in as many shit, fart, and diarrhea jokes as his juvenile mind can think of before inducing an E. coli outbreak.  But he’s not a one-trick pony. He coats on layers of—he he—sex jokes, lots of sex jokes (hand-over-mouth, “Oh my God! No he didn’t say that!” sex jokes). Endless gags including a prostitute Ruth (Sarah Silverman) with a heart of gold and a “huge vagina,” and, of course cum (both talking about it and showing it, recalling There’s Something About Mary’s hair gel scene. Yep, been there seen that). He then takes us back to some good, old, toilet humor with erect golden showering sheep (another hand-over-mouth “Oh my God! No he didn’t!”); he does steer clear of the obvious sheep jokes and rather gives us a retarded sheep!  There are a few comic surprises that amuse, but not enough to redeem this film. 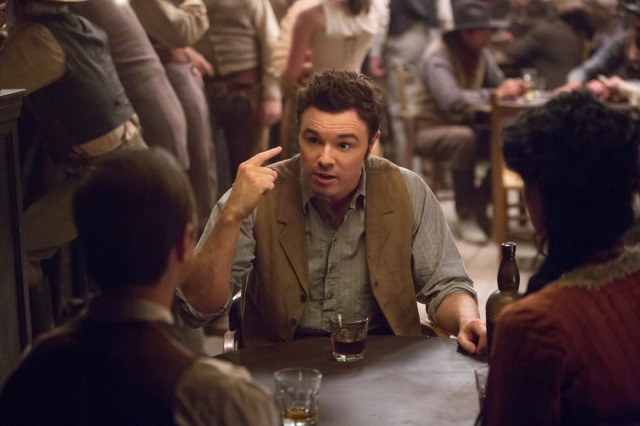 Now, I don’t have a problem with silly, irreverent, gross-out humor, but it’s so much more enjoyable and less intellectually insulting when it is bathed in an element of wit. I don’t necessarily need lofty Woody Allen literary cleverness in my comedies. But MacFarlane’s potty humor represents a paucity of imagination. In using the word fuck and other four-letter words gratuitously in his depiction of the Western United States of 1882, he betrays his inability to express anger, distress, annoyance, and other strong emotional outbursts in his dialog. In fact, all of the film’s dialogue feels out of place, too contemporary, and lacking any craft. I couldn’t help but think that MacFarlane excessively uses fuck, along with the other expletives, because he knows no other way of expressing extreme distress, anger, annoyance, or basic dialog that’s interesting and or engaging. Well fuck him! Sorry, I’m extremely distressed. Clearly, I have no problem with the word. I think South Park: Bigger Longer & Uncut is still one of the best musicals of the past twenty years; it’s filled with the F-word, but it’s also clever and carefully crafted.  How could I possibly object to the F-bomb as one of my favorite directors, Martin Scorsese, drops bombs throughout his films? It’s appropriate to his characters and to the diegesis of the respective films. But MacFarlane’s disproportionate use of the word distracts from any substance that may exist in the dialog among the characters.

One pleasant surprise in this western is Charlize Theron’s performance—this woman can act. Despite an infantile acting partner, she’s somehow able to transcend the inane material and produce an honest performance. Given the challenging task of crafting a sincere presence that relies on more than just her fantastically stunning face, Theron is able to rise well above all in this fecal folly.

I am being unfair to Seth MacFarlane since he is not the sole writer of this movie; he shares that credit with two other writers, Alec Sulkin (Ted, Family Guy) and Wellesley Wild (Ted, Family Guy), so, clearly it took a village. If you remove all the sex jokes, eliminate the four-letter expletives, soften a few of the violent scenes, MacFarlane would have a funny(ish) thirty minute kids’ show. Or, better yet, animate it, leave in the sexual innuendos and irreverent humor, and you’d have a quite funny twenty-two minute animated TV sitcom—Family Guy?  If poop, cum, and piss are what sells tickets these days, then this puerile movie is going to make a shitload of money.
-John David West
@jdwest20