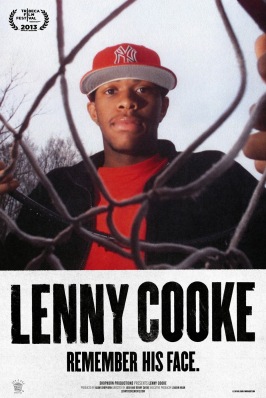 Lenny Cooke is a powerfully poignant documentary about a young man who was inches away from NBA super stardom but never made it big.  Lenny came from a very poor upbringing in a tough section of pre-hipster Bushwick, Brooklyn.  He immediately upgraded his living status the moment he first played organized basketball at the age of sixteen.  Within one year Cooke went from living with rats and crack-heads to swimming in a beautiful pool with a surrounding lawn in an upscale New Jersey home.  Suddenly people were offering Lenny cash and fresh Jordans to play in basketball games around the city.  He had several individuals looking after him, guiding him, financially helping him, but he chose to go his own way.  Lacking the sincere aid of a true mentor and his own self-discipline, Lenny made decisions that would change his life forever.
Lenny Cooke opens to the beat of Mobb Deep’s “Shook Ones Pt. 2,” accompanied by jaw dropping footage of Cooke as a high school basketball phenomenon in 2001.  This raw music is a premonition of what is to follow.  Lenny is seen breaking, wheeling, dealing, and dunking against some of the best NBA talents of 2013, including Joakim Noah, Carmelo Anthony, and LeBron James.  At the time, Lenny was considered the best of the best until the day he challenged a player one year his junior, an adolescent “King James.”  In an infamous Adidas ABCD basketball camp game James scored twenty-four points to Lenny’s nine, killing the game off with a buzzer beating three-point game winning chuck.  Lenny was expected to win that duel and match, but fell short.  Few knew who LeBron James was, but Lenny Cooke was already a luminary.  That moment was a dagger in Cooke’s heart, but it was not the only factor to determine his future.  His lack of work ethic, inflated ego, and indifference to authority majorly influenced the demise of his would-be career.
As hard as it is to see such talent never fully developing, Lenny Cooke is a truly captivating story.  Cooke’s savage aptitude and skills take over the screen anytime he picks up a basketball.  His quiet and laid-back nature off the court makes his on court dominance ever the more mesmerizing.  After poor grades, a series of school transfers and other outside factors, Lenny finds himself away from the basketball courts for his final year of high school.  Regardless, he accepts $350,000 from a promising basketball agent and decides to enter the 2002 NBA draft.  He is shocked when his name is not selected in the first two rounds. 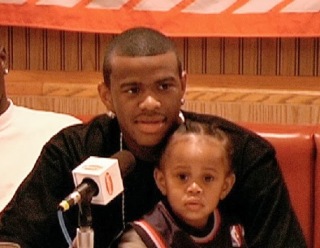 The following years are the harshest, watching Lenny play in second and third tier leagues throughout the world until he prematurely retires.  Cooke goes from legend to one hundred pound overweight blunt smoker in a handful of years.  Lenny now spends his time cooking for his family and taking care of his children, seemingly at peace with his fate as long as it does not repeat itself in his LeBron James adoring son.
This intimate portrayal of a fallen star is a must-see and a life lesson in itself.  Chronologically structured, Lenny’s descent is beautifully shot and scored, mixing rushes of Adam Shopkorn’s previous work with the Safdie brothers’ last four years of footage filming Cooke.  At the close of the film, the older and wiser Lenny is seen in the same frame lecturing his younger self.  He tells young Lenny to stay humble and positive, keep his circle tight, and that he can have anything he wants if he works hard for it.  Lenny Cooke is a chilling film that will go down in history as one of the best basketball documentaries ever made.
-Marco Agnolucci