Jason Statham stares death in the face every damn day of his career. He races cars, hunts down cop killers, and makes phone calls whilst falling out of helicopters. He’s basically the British Chuck Norris. So if you want your hump day to feature some manly action moves with some kick ass choreography, a lot of cheesy one liners, and a few ridiculously fun plot lines then look no further. Jason Statham has it all. 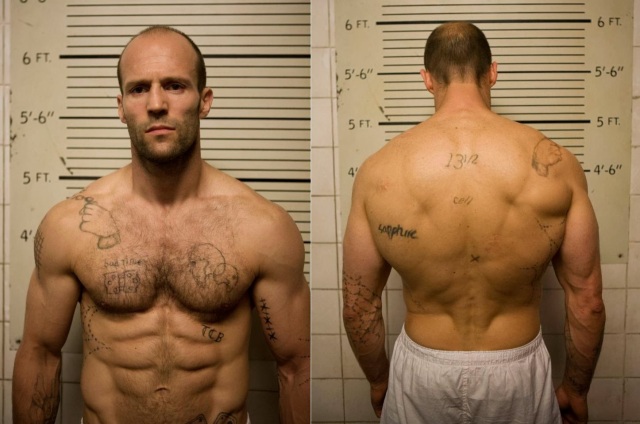 Frank Martin is The Transporter. As an Ex-Special Forces operator, Frank hires himself out as a mercenary who transports unidentified packages no questions asked. His work is simple, he just wants a slick BMW, a nice suit and for everyone to follow the rules: Rule One: Never change the deal. Rule Two: No Names. Rule Three: Never look in the package. Of course not everything goes to plan…

Death Race takes places in a world where prisoners get a chance to shorten their sentence by competing in a deadly race against fellow prisoners. There are no rules on the road to freedom and of course the women’s prison must get involved for motivational purposes. Statham plays Jensen Ames, a man framed for a crime he didn’t commit in some kind of evil ploy…I think. Honestly, I never really payed attention to the intricacies of the plot…the point is there are lots of big explosions and fast cars and pretty people.

Crank is basically like Speed (1994) but with a body instead of a car. Chev Chelios is a professional assassin who is injected with a poison that will kill him if his heart rate drops. And, well, you can only imagine what Mr. Statham does to keep that heart rate up. This film is shameless. Completely ridiculous, blatantly stupid and so very, very bad, it’s actually pretty darn good. And yes, there is a sequel.

Jason Statham is the cop-killer hunting cop. That’s just about as manly as it gets really. Tom Brant is the Detective Sergeant who puts his life on the line to save his own. Shoot outs, big chases, bigger guns and possibly even bigger muscle: that just about sums up this entire action film. It’s the perfect escape for any hump day!

Snatch is probably the most legitimate film Statham has ever starred in. Guy Ritchie really helps him shine as Turkish, the smart and witty low-grade gangster, who gets pulled into the world of fixed boxing and Irish Gypsies. Turkish is sucked into a world of chaos along with his friends Tommy, Brick Top, Boris the Blade, Cousin Avi and Bullet Tooth Tony. This is by far the best movie on this Top 5 list, but be warned, it’s definitely lacking that classic cheese ball, self-aware, shamefully funny comedy.