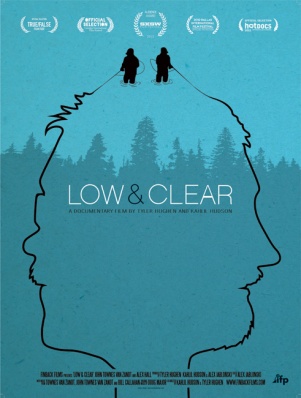 For a documentary about two guys fishing, Low and Clear is actually an engaging experience. Following two men, J.T. Van Zandt and Alex Hall, as they travel to British Columbia for a fishing trip, the film is all about their personalities and how they sometimes clash. At just over an hour, it doesn’t overstay its welcome, as the subject matter doesn’t really allow for anything longer. For what it is, Low and Clear hits the mark and honestly makes me want to try my hand at fishing.

J.T. Van Zandt’s story begins in the Gulf Coast of Texas, where he lives and fishes. The lingering beauty of the Gulf seems to match his viewpoint of fishing, which leans more on the philosophical side of things. He doesn’t care as much about the number of fish he catches, but rather how the experience makes him feel. To quote J.T., “The best and worst of who I am is brought out by fishing . . . I feel like when I’m fishing, I’m exactly who I am.” Alex, on the other hand, is more about the technical side of it. He documents every single fish he catches and has log books dating back at least a decade that describe the number of fish caught and the conditions at the time. He’s also decidedly less Zen, as evidenced by curse-laden outbursts that are infrequent, but nevertheless present in the film. He also can’t seem to understand why J.T. just doesn’t care about actually catching anything.
J.T.’s more measured approach is tested, however, whenever the two are fishing together. Alex’s proficiency grates on J.T.’s nerves throughout the entire film, and it even causes him to doubt himself. At one point, he admits that his philosophizing might just be a smokescreen for the fact that he sucks at fishing. In the end, though, he sticks to his guns about the experience being a personal one that can mean whatever you want it to. I admire that about him, and I’d much rather fish with him over Alex, as I could imagine being taught the ropes by J.T. and enjoying it immensely.

As a film, Low and Clear is almost lyrical in how it portrays both the landscape and the men living within it. Especially when filming the Gulf waters as the sun sets on the horizon, it captures a sense of serenity that’s matched by J.T.’s philosophy. The score contains some original work written and performed by Doug Major, and those pieces—accompanied by licensed music—add some depth to the calm and peaceful mood. For a documentary like this, wanting to partake in the subject at hand after watching it is some of the highest praise one could offer, and I absolutely feel that way after having experienced the scenery of British Columbia, the Gulf of Mexico, and Colorado, where Alex calls home. It just so happens that I also live in Colorado, so I just might explore my options close by.

Aside from their differences in fishing techniques, the other main theme on display is how their friendship has changed over the years. They don’t get to see each other nearly as often as they used to, and they both agree that they’ve changed a bit. As a viewer, it’s hard to grasp those changes, because after all, the film only picks up during their latest adventure together. Some more context as to how they used to interact on these fishing trips would have gone a long way to contrast their current dynamic. I don’t see that as a detriment, exactly, as it’s enough for me to hear them declare their gradual separation in order to believe it.

There’s much made about J.T.’s failings as a fisherman during Low and Clear’s hour-and-nine minutes, and if you want to know if he ever catches something, you’ll simply have to watch it. The time flies by almost contradictorily to the proceedings, since it’s literally two men standing around in a stream the whole time. I enjoyed it, though, which is what matters most in the end. I don’t know if I’ll ever attain J.T.’s tranquility when it comes to fishing and life, but observing him is compelling enough for me to make the attempt.