I’m prepared to eat a lot of crow on this one.  Before seeing it, every time World War Z crossed my mind, the only thing I could think of was the truly awful-looking CGI. That’s absolutely a part of the movie, but it’s by no means the entirety of it. Upon leaving the theater, I was quite pleasantly surprised. So much, in fact, that I think everyone should go see it if the opportunity arises. You should more-or-less know what you’re getting yourself into: Brad Pitt with golden, almost-flowing locks and a global zombie infestation. Regardless of what you might have heard about WWZ’s troubled production, Pitt’s locks hold up mightily in the face of certain death, and the movie is all the better for it.

I joke about his hair because I’m jealous, but Pitt’s on-screen charisma goes a long way. I wouldn’t put his performance in WWZ anywhere near his best work, but it’s still fun to watch him globe-trot in an attempt to prevent a near-apocalypse from turning into a full-blown one. His character doesn’t give him much to do in the way of flexing his acting chops, but at the same time, I don’t feel like it’s necessary.
Pitt plays Gerry Lane, a former U.N. worker tasked with figuring out the answer to a viral outbreak that turns people into mindless biting machines. To make the attempt, Lane has to stow his family aboard a naval carrier while he flies around the world following clues as to the outbreak’s origin and potential cure.  On that note, I really like the relationship between him, his wife (Mireille Enos), and his two daughters. They admirably serve as the anchor to everything else going on, and while it works for the majority of the movie, his family is unceremoniously dumped from the story toward the end. Doing so is a mistake, because the fleeting conversations they’re able to have with each other over a barely-working cell phone remind everyone what he’s really fighting for.

As for what he’s fighting against, it’s a god-awful mishmash of zombie crowds that swirl and twirl around each other like a tidal wave of ants. It’s laughable, and no amount of finessing can explain away how (former) human beings are able to move like that. Thankfully, there are times when individual zombies are needed, and in those instances, they look great. Nothing will ever replace real blood, sweat, and tears, and a scenario during the last quarter of the movie is a testament to that notion. I won’t describe it, since I’d call it the highlight of the movie; suffice it to say that it doesn’t involve any sweeping helicopter shots of zombie hoards, as the trailers are all-too-ready to display.
If you’ve seen Quantum of Solace, then you’re aware of how WWZ’sdirector, Marc Forster, handles action sequences; namely, he fails at them. Just imagine the hurried shaky-cam of the Bournemovies but without proper spacing or coherence. Quantum is particularly bad about this, and while there are several instances of incomprehensible action in WWZ, it doesn’t happen with enough frequency to ruin the whole experience. Still, it’s worth mentioning, since I did notice myself throwing my hands up in frustration a couple of times and whispering “Damn you, Marc Forster!” as Pitt tangles with a zombie up-close. 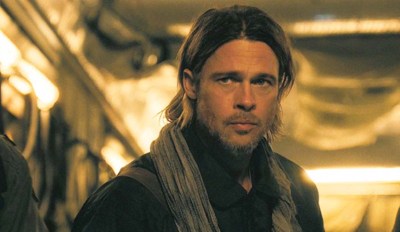 That and the CGI zombies are the most damning things I can say about WWZ. It’s the Brad Pitt show, and in that respect, the whole thing works by virtue of being carried on his capable shoulders. There’s actually not terribly much gore for a zombie flick, but I don’t mind that at all. Like I’ve been saying, it’s all about the characters and the situations both them, and the world, are in. I’m also grateful that the movie almost totally shies away from the cliché of the living being more dangerous than the undead. That will probably always be true, but at this point, the theme has been beaten into the ground, stomped, and then beaten some more with steel-toed boots for good measure. I get it: humans can be really shitty to each other when problems arise. WWZ doesn’t much concern itself with that, so a big sigh of relief is due on that front.
The only other thing I can think of that doesn’t work in the movie’s favor is a certain aspect of the ending. Once the conflict of the story is resolved, it feels like the situation and characters are rushed toward the credits. I’m aware of an alternate ending floating around the internet, but I have yet to look at it. Maybe that one is better, but as for the one on the screen, another five minutes or so focusing on the aftermath of the outbreak could have gone a long way in the name of solid closure.
Oddly enough, I didn’t notice any of the typical ill effects of having Damon Lindelof rework the theatrical ending, which is a small miracle in-and-of-itself. Rushed as it is, there aren’t any of his trademark logical flaws or any signs of his penchant for mystery. Maybe he should just “fix” endings from now on instead of writing whole scripts. All this is to say that WWZ genuinely surprised me. The drama is engaging; the characters and situations are down-to-earth; and man, I want Brad Pitt’s hair. Don’t let the trailers fool you like they did me.
–George Bell
Read more from George Bell at:
http://www.knightsofmarsroundtable.wordpress.com