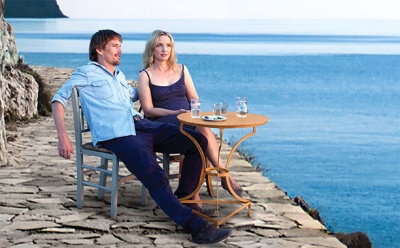 Celine: “Baby, you are gonna miss that plane.”

Nine years ago, Before Sunset ended with these words, leaving us to wonder and hope that star-crossed lovers Celine (Julie Delpy) and Jesse (Ethan Hawke) would finally have the romantic “happily ever after” they deserved.  As it turns out, we no longer have to keep wondering.

Before Midnight is the third film in the series about Celine and Jesse, preceded by Before Sunrise and Before Sunset.  As we hoped, Jesse did not leave Celine’s Paris apartment in 2004.  He left his unhappy marriage and uprooted his life in order to follow his true love. They are now parents of both twin girls and Jesse’s son from his first marriage and are just finishing a six week vacation in Greece.

Other than age, what makes Midnight different from the other films is that we are finally able to see Celine and Jesse as a couple and not as ships passing in the night. They discuss everything from how their perception of time has changed since having children to their sex life. Ultimately, we get see what happens when life and love intersect but don’t necessarily meld.

The beauty and brilliance of these films is how relatable the characters are and how these marathon conversations seem to happen so organically on screen. Both characters are so real and multifaceted that you feel as though you are having a discussion with old friends. At one point during the film, Celine and Jesse have a prolonged argument.  Watching this unfold, we are captivated. Neither party is right or wrong; both have qualities which are not always pleasing and they each say hurtful things out of anger and spite. The audience is so entwined in Celine and Jesse’s lives at this point that their characters seem to be almost an extension of us.

In April, I attended a panel discussion with Delpy, Hawke, and co-writer/director Richard Linklater at the Tribeca Film Festival. For each of the films (including Sunrise, where Delpy and Hawke did not receive a screenwriting credit) all three sat together for several weeks in hotels rooms and continued to talk until they had a script. According to them, every pause and “um” is scripted and nothing is improvised.  The supreme talent displayed by these two actors who take dialog that they have reworked constantly and make it seem fresh and in the spur of the moment is awe-inspiring. Sadly, because it seems so effortless, their amazing talent can be overlooked.

I was first introduced to this series nine years ago, just before the release of Sunset. In preparation, I rented Sunrise and a week later saw Sunset in the theater. At the time, I was a 20 year-old college student who was in love with love, utterly convinced that I would have a cinematic romance. Therefore, I loved Sunrise just a hair more than I loved Sunset. The romanticism spoke to me. As with Celine and Jesse, I have gotten older and now I am closer in age to the characters in Sunset. Upon a recent viewing, I realized that my perspective had changed. I now liked Sunset a little more. Now, I have a few of my own romantic battle scars, and I can really identify with the idea that connections like those in the film only come along a few times during our lives. I now wonder how I will feel in another nine years after viewing Midnight again.

Each of these films is about true love: The wonder of the discovery, the brilliance of reconnection, and the battle that wages that makes it all worthwhile. Before Midnighthas not only met the expectations of the fans of this series, but exceeded them in a beautiful and true way. The true love shared is not only between Jesse and Celine, but also between the audience and the characters.
–Ariadne Ansbro