Search
Fast Five Film is our monthly quick pick around any topic that catches our eye.

It’s Election Day in the US and Moviefied is taking a quick look at our favorite top five political films. So, after you return from casting your VOTE, let us know if there are any films on this list that you’d nominate or veto? Isn’t that what democracy’s all about? 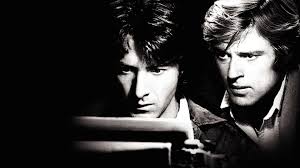 Based on the non-fiction book by Bob Woodward and Carl Bernstein, better known as the the Washington Post journalists who blew the lid off the Watergate scandal. The crisis that followed ended in the resignation of President Nixon, the first U.S. head of state to resign. This Oscar-winning political film is very intelligent, working as an effective thriller (even though we know the outcome), and as a fairly abstract chronicle of the dark halls of corruption and power.

Alarming and insightful, this hotly contested high school election becomes a metaphor for the current state of American politics. This dark satire is a horrifying allegory of current day politics and adult society. Election is an elegant morality tale.

The film begins with the caption, “Why does the dog wag its tail? Because the dog is smarter than the tail. If the tail were smarter, it would wag the dog.” This dark, witty comedy (starring Dustin Hoffman and Robert De Niro), describes a Washington spin master who hires a Hollywood producer to create a fake war with Albania in order to distract the electorate with a sex scandal just days before a presidential election.

A sharp expose of the new media-powered American political process, The Candidate offers Robert Redford (producer/star) one of his strongest roles. Director Michael Ritchei’s tale became prophetic in its message.

Director John Frankenheimer masterfully guides this political satire as he seamlessly shifts from the real to the surreal, hypnotizing without confusing the audience. Angela Lansbury is very un-Angela-Lansbury-like as the conniving, power hungry mother of Korean War veteran (Laurence Harvey) and wife to a vice presidential nominee (James Gregory). Her performance is unforgettable and will be forever cemented as one of cinema’s great evil villains.
2. Z (1969) 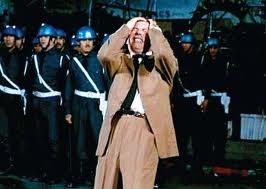 During the opening credits of Z, director Costa-Gavras inserts the following disclaimer: “Any resemblance to real events, to persons dead or living, is not accidental. It is INTENTIONAL.” Clearly Gavras’s fictional account of the 1963 assassination of Greek leftist politician Grigoris Lambrakis by right wing thugs is more than fictional. He intends to expose the injustice initiated by Greek officials. The editing by Françoise Bonnot is energetic, meticulous and ahead of its time. While no country is mentioned by name, the soundtrack by Mikis Theodorakis locates the film squarely in Greece. Roger Ebert wrote in his 1969 review, “Z is at the same time a political cry of rage and a brilliant suspense thriller.” Mr. Ebert’s words still hold true today.
3. Reds (1981)

Revolutionary politics and love are central to Reds. Warren Beatty directs writes and stars as a man, journalist John Reed, who is compelled to be at the center of radical change. All three hours and nineteen minutes of Reds is an achievement in great filmmaking, but the fact that a movie about a bunch of revolutionary communist made in Hollywood during the Regan era is an even greater achievement.
4. Duck Soup (1933)

The Marks Brothers said they were only making a funny movie and nothing more. Maybe that’s true, but Duck Soup has become one of the great antiwar films, which simultaneously makes us laugh while looking at the absurdity and silliness of war and politics.
5. Mr. Smith Goes to Washington (1939)